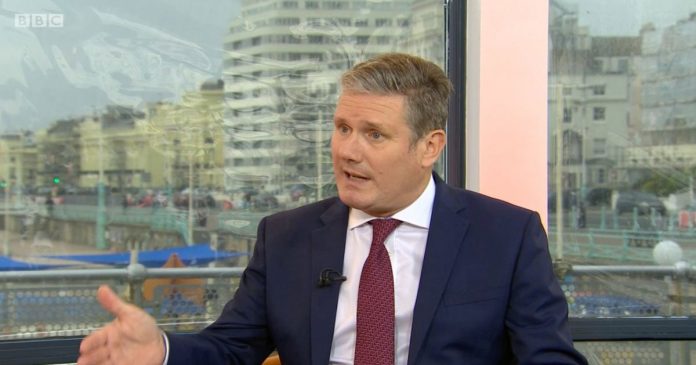 Starmer was asked directly, would he consider nationalising the key energy providers to tackle the energy crisis. He replied: “No.”

Public ownership of gas and electricity was always a cherished aim of the Labour Party. For years under privatisation, the swindling of the consumer has gone hand-in-hand with outrageous profit-taking by the corporate giants, to the loss of the public purse. Far from helping customers through keen competition, the main effect of energy privatisation has been – like austerity – a redistribution of wealth from the have-nots to the well-to-do.

What a pity, therefore, that Labour will no longer make this an aim of the party, it will continue to allow monopoly capitalism to stamp its heel on the most vulnerable with every price hike.

Starmer was asked directly whether he would consider nationalising the key energy providers to tackle the energy crisis. He replied: “No.”

Instead, he said Labour would advocate nationalisation only when it would deliver improved value and services for taxpayers.

During his Labour leadership campaign, one of Starmer’s 10 key pledges was that “public services should be in public hands, not making profits for shareholders. Support common ownership of rail, mail, energy and water.”

The shadow business secretary, Ed Miliband, suggested on Newsnight earlier in the week that the party was about to renew its commitment to common ownership of energy and other public resources.

“We haven’t changed that commitment,” Miliband said. “If we’re going to make this green transition, then public ownership is the right way to go.”

“Wait for the conference, but Keir Starmer said in his leadership campaign he was in favour of public ownership in those areas. We haven’t changed that commitment,”

He added: “If we’re going to make this green transition, then public ownership is the right way to go. We don’t resile from those commitments.”

Obviously, Starmer does not agree with the former Labour leader Ed Miliband or the 2019 manifesto he stood on to be elected let alone his personal pledge of public ownership where he appeared to ditch his 2020 leadership pledge to “support common ownership of rail, mail, energy and water”.

He was shown one of his 10 pledges during his leadership election which said “public services should be in public hands, not making profits for shareholders. Support common ownership of rail, mail, energy and water”.

“I don’t see nationalisation there,” he said.

“When it comes to common ownership I’m pragmatic about this. I do not agree with the argument that says we must be ideological.”

But he did not say what form common ownership would take if it was not nationalisation.

Ms Reeves told the Sunday Times: “I don’t have any plans to increase the rates of income tax.”

But she added: “I do think that people who get their income through wealth should have to pay more.”

Mr Starmer told the BBC: “We are looking at tax – nothing is off the table, but we don’t know what the state of the national finances will be as we go to the election.

“What Rachel Reeves (shadow chancellor) said is she’s not currently considering income tax and that is fine, but what I’m saying is as we go into the election we will apply the principles we have set out to the situation as it arises.

“What we don’t want to do – whether it’s income tax or any other sort of tax, national insurance – is unfairly to hit working families, which is what this Government is doing.”

He did not say whether he is looking at a wealth tax, but added: “Look at the choice the Government is making – under their provision, under their tax they announced the other week, those with many properties as landlords don’t pay a penny more, their working tenants do.”

Liz Truss former Energy company employee, British prime minister, to give her former bosses over £150 billion of our money