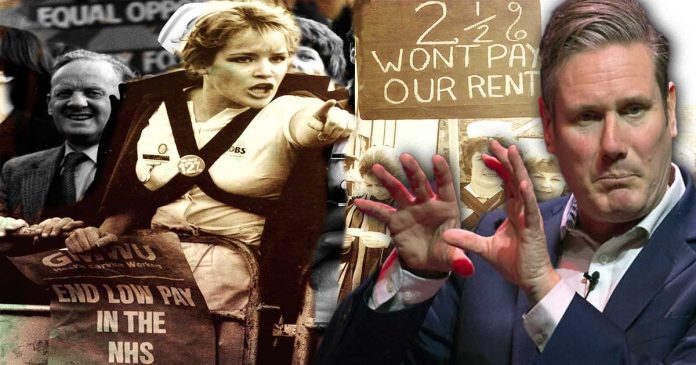 Keir Starmer has refused to back striking NHS workers, as the main nurses’ union ballots its members for industrial action over pay.

Nurses urged to strike for the first time over pay.

The Royal College of Nursing (RCN) is balloting 300,000 of its members about strike action over pay and staff shortages. The ballot is the first in the union’s 106-year history, it is in protest at the government’s decision in July to award most NHS staff a poor 5% pay rise.

The RCN is now campaigning for a rise of 5% above inflation, which is currently 10.1%.

Strike action is always a last resort. But it can be a powerful tool for change. Unfairly low pay in the nursing profession is driving chronic understaffing. It puts patients at risk and leaves nursing staff overworked, underpaid and undervalued.

Pat Cullen, the union’s general secretary and chief executive, in a message to members who are due to receive a ballot paper. said: “This is a once in a generation chance to improve your pay and combat the staff shortages that put patients at risk,” said

“Governments have repeatedly neglected the NHS and the value of nursing. We can change this if together we say ‘enough is enough’.

“Record numbers are feeling no alternative but to quit and patients pay a heavy price. We are doing this for them too.”

Speaking last Thursday, she said nurses would still provide critical care if the strike went ahead. “Nurses will do nothing to add to the risk that patients are facing every single day as a consequence of not having those nurses in the system to look after them,” she told the Radio 4’s Today programme.

“I had a privilege to lead the first nurses’ strike in Northern Ireland for 103 years. That was done very safely, very effectively and totally professionally, and that put no patient at further risk. We had very clear protocols about organising it. There is no thing in our profession where we down tools and walk off wards or leave our patients in the community.

“We continue to provide critical services throughout any strike.”

The aim is to secure Fair Pay for Nursing.

With any industrial action to bring about a negotiated settlement, there needs to be a certain amount of goodwill. This can be reinforced and achieved a lot quicker through the backing and support of the public, the kind of support shown towards Railworkers over recent months in their fight for a fair deal.

Although public support gives the unions strength both these fights would be much easier won if the Labour Party was fully behind the workers.

Unfortunately, Sir Keir Starmer has no intention of supporting these fights and is showing the same contempt for supporting nurses as he has in his support for Rail workers.

Over the last week, Sir Keir Starmer has repeatedly refused to support striking workers, including those working for the NHS as the main nurses’ union prepares to ballot members on industrial action.

In a round of regional radio interviews, the Labour leader said he understood why strikes were taking place but repeated his opposition to standing with workers on picket lines.

On BBC Radio Devon he was asked three times whether he would back the Royal College of Nurses, which is recommending its 300,000 members vote for strike action.

He said: “I completely understand why people are concerned and are considering industrial action. We’ve had wages stuck for many, many years because the economy hasn’t been working under this government. I don’t want the strikes to go ahead. My wife works in the NHS – the last thing that anybody who works in NHS wants is to go on strike.”

Pressed on whether he would back strikes, he said: “I don’t want the strikes to go ahead. We want to be in government; in government you resolve issues.”

Asked by BBC Radio Sheffield whether he would join union members on the picket lines, Starmer said: “No, I don’t think the job of the leader of the Labour party … my job is to get Labour into government and to be the prime minister.”

He said: “I think that’s a question for each of the negotiations exactly where it lands. But my job as leader of the Labour party is to make sure we get a Labour government so we can fix the underlying problem.”

Starmer opted to do a series of appearances on local radio a week after Truss struggled through a similar interview round.

In 30 minutes of interviews on six different stations, he used the word “kamikaze” 27 times to describe the mini-budget and Truss’s approach to the economy. On BBC Radio Lincolnshire he used the word seven times alone. In the last interview, on Radio Surrey, the presenter Peter Gordon said he would ring a bell if Starmer used the word again.

Starmer was asked about “chaos” in Oxfordshire after a series of water mains burst and whether the local provider, Thames Water, should be nationalised. He told BBC Radio Oxford: “I think [the answer is] better regulation and it is enforcing the regulations that we’ve got. There is a case for public ownership of some areas we’ve set out, Great British Energy for example, which would be a publicly owned company to deal with energy generation of the future. I want to change all that. So I’m not ideological; I’m a practical person.”

On a consolatory note, Starmer told BBC Radio Manchester a Labour government would consider stripping the rail company Avanti of running the west coast mainline after a series of problems with the service. He said: “We should look at that. It’s simply not good enough and it’s got to change.”

Nurses across UK back strikes in pay dispute