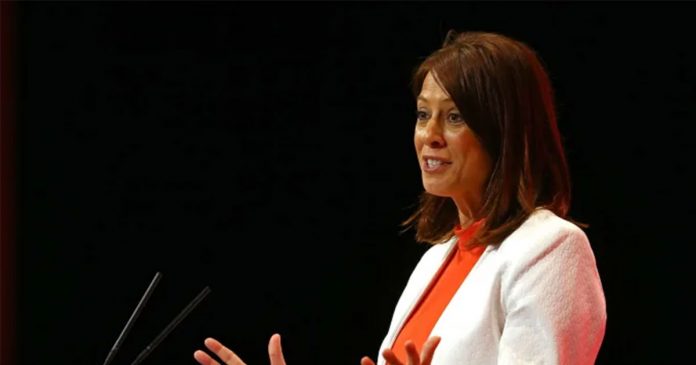 Labour’s shadow justice minister Gloria De Piero has quit its front bench and decided not to stand at the next general election, saying she is worried about the party’s “lack of tolerance”.

Ms De Piero, who is the MP for Ashfield in Nottinghamshire, said she had received “grim” online abuse.

Gloria De Piero campaigned for Remain in a strongly pro-Brexit seat but does not support a second referendum.

Speaking to members on Friday, Ms De Piero said a “lack of tolerance for different viewpoints in the Labour Party frankly worries me”.

“We have to have respect for each other, even if we disagree, because we are all part of this party,” she added.

She said she received abuse on social media from people wanting to overturn the referendum result.

Earlier this month, Labour leader Jeremy Corbyn challenged the next Conservative leader to hold another referendum before taking the UK out of the EU, saying Labour would campaign for Remain.

Ashfield CLP voted against a second referendum at conference

Gloria stated to members of her CLP: “People in this local Party have respected my position over respecting the referendum result – in fact Ashfield delegates voted against a second referendum at last year’s conference.

The widely respected MP told members in Ashfield, a Leave constituency, that she had been subject to “grim” abuse from second referendum campaigners.

It’s a democracy we live in after all, but the abuse I’ve had on social media from some who want to overturn the referendum has been pretty grim.

So to all those who have said that I only hold the position I do because I want to hold my seat, I’m afraid it’s much worse than that – I actually believe it and I’ll keep fighting for a Brexit with the closest possible trading ties with the EU.

Gloria De Piero insisted she would continue to fight for Brexit – albeit one with the “closest possible trading ties” with the EU.

She said: “I will continue to give the job 100 per cent but I won’t be the Labour candidate at the next election.”

Gloria De Piero is and has been an excellent Labour MP who as worked hard for her constituents and the Labour Party.

Ms De Piero has represented the traditionally safe Labour seat since 2010 but at the last election won by only a few hundred votes.

She continued: “This party is about a set of values not any individual and we would all do well to remember that.

“And while I’m at it, and it doesn’t happen in Ashfield, but when I hear people being called right-wing in the Labour Party I find it utterly offensive.

“We are all left-wingers in this party – that is why we joined the Labour Party.”

Gloria’s full speech to Ashfield Labour members. In the speech you will notice there is no assertion to antisemitism or the leadership of the Party but many anti Corbyn media outlets have tried to link the two. LINK

Anyone waiting for Tom Watson to defend Ms De Piero over the remainer abuse will be waiting a very long time. His support is selective, only needing one criteria ‘a swipe at the Labour Party leader jeremy Corbyn’.

Remain abuse for Labour MPs who do not back a second referendum.

“I WILL NOT VOTE IN FAVOUR OF A ‘PEOPLE’S VOTE’ IF IT COMES BEFORE PARLIAMENT.”

Emma Lewell-Buck along with fellow Labour MPs Sarah Champion and Caroline Flint have also said publicly that they would throw their weight behind no-deal if the only other option was remain. They believe democracy is must come first. LINK

the country wants us to leave, and for our democracy, I think we have to leave. So therefore, if it came to it, I would take no deal if that meant we could leave.

These women have stood with courage and determination in the face of abuse to see democracy and the promise by the Labour Party to respect the result of the referendum being carried out.

It is a testament to all the courageous female MPs and campaigners that have stood firm in the face of adversity and changed this country for the better.