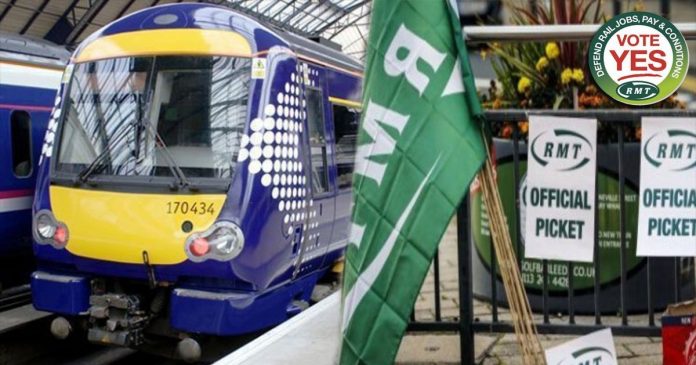 RMT members from Network Rail and 13 major franchise operators from across the country will walk out this summer over a pay, jobs and conditions dispute.

With signalling staff signed up to join the action, as many as four fifths of services could be axed, including all early morning and late night trains.

Railway workers have voted overwhelmingly in favour of strike action across Network Rail and the train operating companies, in the biggest endorsement for industrial action by railway workers since privatisation.

71% of those balloted took part in the vote with 89% voting in favour of strike action and only 11% voting against.

The union will now be demanding urgent talks with Network Rail and the 15 train operating companies that were balloted to find a negotiated settlement to the dispute over pay, jobs and safety, armed with a mandate from thousands of workers to order a mass withdrawal of labour if they don’t produce a compromise.

RMT general secretary Mick Lynch: “Today’s overwhelming endorsement by railway workers is a vindication of the union’s approach and sends a clear message that members want a decent pay rise, job security and no compulsory redundancies.

“Our NEC will now meet to discuss a timetable for strike action from mid-June, but we sincerely hope ministers will encourage the employers to return to the negotiating table and hammer out a reasonable settlement with the RMT.”

It’s unclear precisely when the walkout will take place but trade unions must give at least a fortnight’s notice before striking.

The timing of the vote means it won’t coincide with the extended Platinum Jubilee Bank Holiday weekend.

Another rail union, the Transport Salaried Staffs’ Association (TSSA), has warned of a ‘summer of discontent’, with similar action on the way unless pay disputes are resolved.

It comes amid an ongoing dispute between Scotrail workers and the Scottish government, which has already resulted in a reduced timetable because of a union-backed overtime ban.

Which train companies could be impacted by the RMT strike?

The following companies have voted for strike action and action short of strike:

Images have emerged of ‘hypocrite David Lammy’ standing on a picket line coming after he condemned Labour MPs who join rail workers on the...