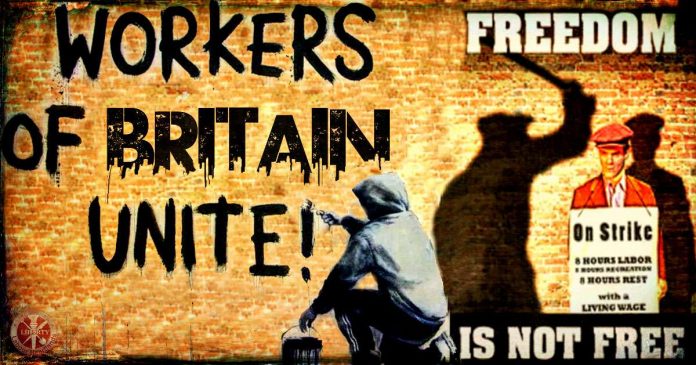 Fight for the right to strike…

Unions have pledged to fight ministers’ “desperate” proposals to force staff to work should a national rail strike be called.

The National Union of Rail, Maritime and Transport Workers (RMT) and others said any such move would meet the “fiercest resistance”.

More than 40,000 RMT members are voting on whether to strike in the face of expected cuts including the loss of thousands of maintenance jobs at Network Rail, pay freezes and the closure of station ticket offices, after the government told the railway industry to find huge savings after a drop in revenue caused by the Covid pandemic. The results of the vote are expected on Wednesday morning.

Shapps told the Telegraph that ministers were considering passing laws that would fulfil a Conservative manifesto pledge to keep services running during transport strikes. “We had a pledge in there about minimum service levels,” he said. If they really got to that point then minimum service levels would be a way to work towards protecting those freight routes and those sorts of things.”

Unions said Shapps was talking about denying basic rights. The RMT’s general secretary, Mick Lynch, said: “Any attempt by Grant Shapps to make effective strike action illegal on the railways will be met with the fiercest resistance from RMT and the wider trade union movement.

“The government need to focus all their efforts on finding a just settlement to this rail dispute, not attack the democratic rights of working people.”

The Transport Salaried Staffs’ Association (TSSA), which may also hold a national rail strike ballot if compulsory redundancies are made, said it was “desperate nonsense from the Tories, who have chosen to attack working people who kept the railways running every single day of the pandemic”. The union’s general secretary, Manuel Cortes, said: “Our union will defy their unjust and undemocratic laws every step of the way.”

The TUC general secretary, Frances O’Grady, accused ministers of trying to distract from the cost-of-living crisis by picking a fight with unions. “The right to strike is crucial in a free society,” she said. “Threatening it … means workers can’t stand up for decent services and safety at work or defend their jobs or pay.”

The Unite general secretary, Sharon Graham, said the union would “confront head-on, and by whatever means necessary, any further attacks on the right to strike”.

Responding to the latest threats by the government to undermine workers’ right to strike, Unite general secretary Sharon Graham said: “Unite will confront head-on and by whatever means necessary, any further attacks on the right to strike.

“In Britain, we already operate under the most restrictive labour laws in Western Europe. A workers’ right to withdraw their labour is inalienable in any democracy worth its name.

“This is a cynical, authoritarian move designed to protect corporate profits and has been wheeled out to satisfy the needs of short-term factional politics.

“While corporations make billions and ordinary working people suffer, this government chooses to attack the rights of British workers.

“When P&O, a billion-dollar company owned by a foreign dictatorship, brutally sacked 800 British workers, they broke the law. The government’s response was a fine.

“When British workers threaten to defend their living standards in the face of a cost-of-living crisis not of their making, this government threatens to take away their democratic rights.

“We are now forced to put the government on notice. Unite will not sacrifice the protection of our members’ jobs, pay and conditions on the altar of ‘party gate’. If you force our legitimate activities outside of the law, then don’t expect us to play by the rules.

“And Labour now needs to stand up and be counted. I don’t want hard-to-believe promises for the future; we need concrete action now. This is an attack on working people and on the whole of the labour movement. It’s time for the political wing that was founded by and continues to be funded by our members to step up to the plate.”

Rail unions have warned of a “spring of discontent” after long-running talks with industry bosses over potential savings broke down at the end of last year without agreement. Some rail operating companies are believed to be considering wage increases of 2-3%, but most pay was frozen during the pandemic and inflation has reached 9%.

The rail industry is drawing up contingency plans for a national strike, including prioritising freight train operations to keep goods moving and shelves stocked.

Rail firms say the strike ballot is premature with most pay talks yet to take place, but unions believe swingeing cuts will come. The industry needed about £15bn of additional funding when Covid drove passengers away, and the government has made clear to rail executives that the subsidy must fall. Unions have urged the government to tackle rolling stock companies, which were guaranteed income from taxpayers and paid huge dividends to shareholders during the pandemic.

The Department for Transport has said industrial action would cause “irreparable damage to our railways”, with many former commuters no longer forced to travel daily to workplaces.

A Rail Delivery Group spokesperson said rail firms were “acutely aware of cost of living pressures” on staff, but added: “Our whole focus now should be securing a thriving future for rail that adapts to new travel patterns and takes no more than its fair share from taxpayers, instead of staging premature industrial action which would disrupt passengers’ lives and put the industry’s recovery at risk.”