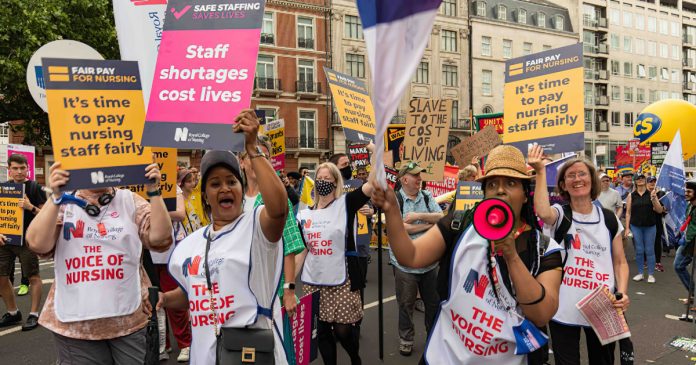 As the RCN’s historic ballot enters its final days, new polling reveals nearly two-thirds of the public strongly supports strike action as concern over the number of nursing staff working in the NHS peaks.

For the first time in its 106-year history, the Royal College of Nursing (RCN) has asked 300,000 of its members if they want to mount a campaign of industrial action.

It comes amid warnings that record numbers of nurses are leaving the profession.

The RCN said new analysis by London Economics has found that pay for nurses has declined at twice the rate of the private sector in the last decade, with their real-terms earnings falling by 6%.

The union wants nurses to be given a pay rise in line with the rate of inflation, which is currently 10.1%.

In July, the government awarded most NHS staff a pay rise of at least 4.5%, which it said gave many workers a £1,400 salary increase.

The RCN has been urging its members to vote in favour of industrial action, with the union’s general secretary saying it is a “once-in-a-generation chance” to improve pay and combat staff shortages.

“Governments have repeatedly neglected the NHS and the value of nursing. We can change this if together we say ‘enough is enough’.”

“Record numbers are feeling no alternative but to quit, and patients pay a heavy price. We are doing this for them too.

“It’s clear we need urgent change. Nursing is the best job in the world. Protect it with your vote.”

The NHS staff have public backing for strike action.

YouGov polling shows 65% of the public support nursing staff taking strike action. Just one in two Britons are now confident in the quality of care available to them on the NHS, and the majority (79%) of respondents say they believe there aren’t enough nursing staff in the NHS to deliver safe patient care.

With the ballot closing this week on Wednesday 2 November at 12 noon, members have just a few days left to return their ballot papers. It could be close so it’s important that every vote is cast. This is a unique opportunity to fight for fair pay for nursing, protecting the future of the profession and patient care in the NHS.

RCN General Secretary & Chief Executive, Pat Cullen, said: “The public stands with nursing staff as they know that when nurses speak, they speak for patients. It is for them that our members are voting to strike.

“Nurses have already suffered a decade of real terms pay cuts, and many simply cannot afford to practise anymore. They are being forced to leave the profession and a chronic shortage of nursing staff is putting patients at risk.

“Nursing staff are saying enough is enough, for our profession and for our patients. I urge any member who has not returned their ballot paper to do so now – every single vote counts. Don’t miss this historic opportunity to have your voice heard.”

Earlier this week, new Prime Minister Rishi Sunak and Chancellor Jeremy Hunt announced the fiscal statement planned for Monday (31 October) has been delayed until mid-November and are expected to announce government spending cuts.

In the same poll, the public made it clear they do not support cuts to NHS spending. More than half (56%) said the NHS was among the top three areas of spending that must be protected, which is double the support given to any other spending area. Over half (52%) also suggested that current underfunding of the NHS is the primary cause of increased waiting lists for operations and other specialist NHS care.

The union is also inviting members of the public to co-sign a letter to Prime Minister, calling for the government to “see sense” and “protect nursing”.

Today, one in eight nursing roles in the NHS in England alone is vacant, and an open letter to the Prime Minister demanding fair pay for nursing to protect patient safety has gathered over 50,000 signatures to date.

The YouGov survey, commissioned by the RCN, took place on 21 and 22 October and asked more than 1,600 adults in Great Britain for their views on care in the NHS.

Nurses across UK back strikes in pay dispute

Privatising the NHS does not depend on a Trade Deal with the US, It’s been happening for years.