At 6ft 9in Kawczynski is the embodiment of Tory sleaze.

He had ranted at parliamentary staffers when he could not join a virtual meeting, then made baseless complaints about them when drunk.

The Standards Commissioner concluded that Mr Kawczynski’s behaviour amounted to bullying and was made worse by his ‘abuse of power’ and ‘lack of contrition’.

He was told to make an apology by the Independent Expert Panel, which decides on sanctions in bullying cases.

But he appealed, claiming he faced ‘serious difficulties’ in his constituency, partly as a result of a flooding crisis, but also because of his 6ft 9in height, which makes him the tallest MP.

His height made him ‘very conspicuous’ and he had come under ‘repeated attack by members of the public’, he claimed. 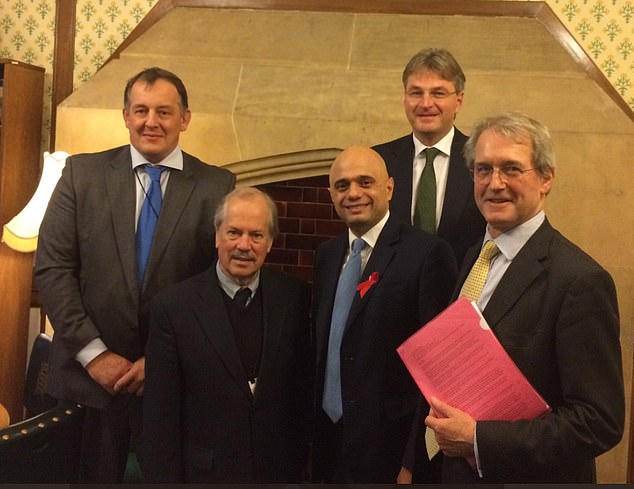 Mr Kawczynski’s appeal was rejected and he was ordered to make a public apology on the floor of the House, in which he said: ‘I did not swear nor raise my voice but my behaviour led to two complaints.

‘I have reflected on my behaviour, I accept it constituted bullying and as such was entirely inexcusable.’

He later admitted that he did not mean his apology and was only going through the motions to avoid being suspended from the House.

At the same time he told a national newspaper that making the apology was ‘something I am going to have to do’ and he would ‘use the script he had been provided’ – although he denied it meant he was doing it ‘with his fingers crossed behind his back’.

As a result of his insincere speech in the Commons chamber in June 2021, Mr Kawczynski is under investigation again by Miss Stone for the second time in five months.

In 2017 there were allegations of harassment of women that swept through Parliament, he was reported to have once pressured a young female parliamentary researcher to go on a date with a wealthy contact of his.

Kawczynski is currently being investigated under Paragraph 17 of the Code of Conduct for Actions causing significant damage to the reputation of the House as a whole, or of its Members generally.

Kawczynski has been reported to the parliamentary commissioner for standards, after the Guardian revealed how the politician hosted a Saudi Arabian businessman in parliament while hoping to secure a lucrative second job.

Thangam Debbonaire, the shadow leader of the Commons, asked Kathryn Stone to investigate whether any wrongdoing took place, saying: “This would appear to be yet another potentially egregious breach of the rules. An MP trying to use their parliamentary resources to tout for a second job is unacceptable.”

it is claimed Kawczynski pleaded with a fixer to help him secure a well-paid second job with a Saudi company or other work relating to the Middle East, at one point saying he needed money to pay school fees.

Kawczynski’s repeated pleas for lucrative employment – revealed in a series of WhatsApp messages seen by the Guardian – show him citing his pro-Saudi stance in parliament as part of an attempt to get paid work from a businessman.

The Tory MP for Shrewsbury and Atcham asked a fixer to find him work with a Saudi employer, describing himself as the most “pro-Saudi” member of parliament and boasting that the Saudi leader, Mohammed bin Salman, “has stated that Saudi has no better friend in UK than me”.

In one message, Kawczynski said: “I am looking for a position with a company as non exec director or adviser/consultant. Obviously my passion for Anglo Arab relations [is] something which could help a company with relations in the UK or Middle East. Not sure what remuneration I am looking for but you are such a good negotiator!!! Best wishes Daniel.”

In another, the Tory MP asked the fixer for paid work on a conference related to Saudi Arabia’s regional foe, Qatar: “Promise you will push for good remuneration too for me … I need it to pay school fees!”

Kawczynski arranged to host one potential Saudi employer in parliament, offering him a tour of the House of Commons and a dinner in the MPs’ private dining room. He also arranged to meet the fixer in his parliamentary office to discuss a project.

While no new employment appears to have materialised from the conversations, both incidents raise questions over whether Kawczynski breached rules that bar MPs from using the House of Commons for private work. A spokesperson for Kawczynski said he had “broken no rules with regards to second jobs, and most importantly he prioritises his work as MP for the constituency of Shrewsbury and Atcham”.

Elsewhere in the messages, which were sent between September 2017 and June 2018, Kawczynski said he was disillusioned with politics in Westminster and would like one day to be UK ambassador to Riyadh rather than a backbench MP.

But his entrepreneurial efforts don’t stop there.

The Warsaw-born Tory MP has defended his £22,000 taxpayer-funded Polish lessons after being criticised on social media.

Kawczynski, has claimed £22,000 under an obscure parliamentary scheme for language lessons in recent years, including £8,244.03 last year, the highest yet.

What language is he learning? Polish. Which is rather strange. In March 2019 the Warsaw-born Kawczynski told his local newspaper he was already a “fluent Polish-speaker”. He repeated the claim in the House of Commons a few weeks later. And the Eurosceptic Tory proudly used his language skills to communicate directly with Poland’s government during Brexit.

Daniel Kawczynski had the lessons over four years, including sessions worth more than £8,000 in 2020/21, a Sunday Times article stated.

A Freedom of Information request showed Mr Kawczynski had received nearly £22,000 worth of lessons between 2016 and 2021, a figured worked out over financial years. The Shrewsbury MP disputed the number and urged the Shropshire Star to ask the House of Commons to check the veracity of the figures. It is understood that in the three years up to November 2021, Kawczynski received £18,328.38 worth of lessons, equating to 407.5 hours of tuition at an average of £44.98 per hour.

The Conservative backbencher, who moved to the UK when he was six, told the BBC he’d “never been fluent” in Polish.

He said his mother prevented the family from speaking their native language so they could “integrate into British society” after relocating in 1978.

Mr Kawcyznski said he had undertaken the lessons because he is the Chair of the All Parliamentary Group for Poland and meets regularly with Polish parliamentarians and the Ministry of Defence in Warsaw.

However, Kawczynski claimed in a 2019 tweet that he was an “almost fluent Polish speaker”.

As almost fluent Polish speaker I am doing all I can can to convince Polish govenemt to veto extension of Article 50.Others working on Czechs and Hungarians. One of these will veto I predict. @BorisJohnson @robpowellnews pic.twitter.com/1IslpgIClp

When asked about the tweet, Mr Kawczynski said: “I was naive to think my Polish was good enough to have intricate discussions on a technical level with the Polish government.”

The House of Commons said Members of Parliament can request professional development “on a case-by-case basis”.

The lessons have now stopped, Kawczynski said, adding he has asked the House of Commons to find cheaper tuition.

He said: “Despite my ability to engage conversationally, my ability is however limited to either read or write in the Polish language.

“I therefore took the opportunity to improve my Polish language skills via the options available through the Learning and Development Team in the House of Commons to enable me to converse more effectively using the technical terms needed for bilateral discussions as well as to improve my Polish reading and writing skills.

Hitting out at some newspapers for their coverage of the matter, the MP said: “Despite my commitment to building more effective international links with Poland and working to improve my Polish language skills to facilitate this, biased and out-of-context reports have been written.

“While the media provides an invaluable service in exposing and reporting wrongdoing, apparent predisposition by several journalists to consistently belittle and condemn politicians as a default mode in attempts to grab sensational and inaccurate headlines is frustrating, regrettable and a public disservice.”

There is no suggestion that Mr Kawczynski has broken any rules in taking the lessons, with the Commons offering “training in accordance with their parliamentary duties”.

There is a suggestion that Mr Kawczynski seems to have embraced every aspect of Tory sleaze with gusto.

Mr Kawczynski first gained notoriety in 2013 when he told a one-legged drug addict outside Westminster tube station to stop begging and ‘get a job’.

The MP, who was an adviser to David Cameron on Eastern Europe, also faced criticism over his support for Saudi Arabia, leading several delegations to the country and defending its role in the war in Yemen.

Last year he was condemned for appearing at a conference with Right-wing populists Viktor Orban of Hungary and Matteo Salvini of Italy.