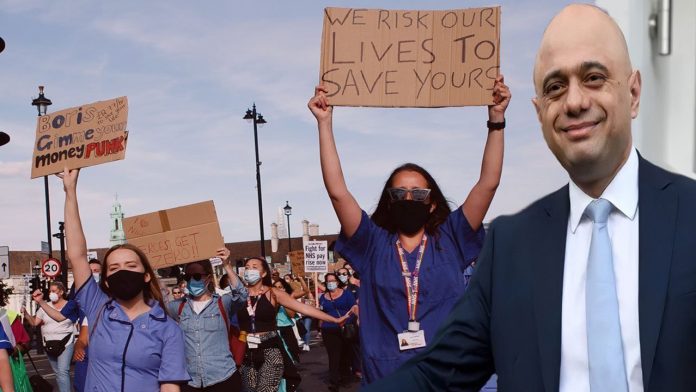 The normally moderate Royal College of Nursing described the 3% pay rise for NHS staff in England as a “shambolic announcement” after a “shambolic day”.

Ministers have offered NHS staff in England a 3% pay rise, three times higher than its insulting initial 1% offer which received a backlash from nurses unions and NHS staff.

A 3% pay rise from the government to NHS workers in England has been heavily criticised as “paltry”, “appalling” and “shambolic” by union leaders.

Those receiving the increase, which is backdated to April 2021, include nurses, paramedics, consultants, dentists and salaried GPs.

The government says that for the average nurse, this will mean an additional £1,000 a year. And the extra sum is expected to equate to around £540 for cleaners and porters.

However, nurses are likely to reject the award as too low and may take industrial action in protest. Other health unions also plan to ballot their memberships over possible strike action.

The workers are being recognised for their pandemic contribution during an “unprecedented year”, says the Department of Health and Social Care (DHSC).

Health Secretary Sajid Javid has said it is a real-terms increase – but Donna Hales from campaign group Nurses United told Sky News: “It’s not even an attempt at a pay rise.”Advertisement

She said she was “very insulted, very angry, very deflated, very disappointed… but to be fair, I’m not surprised.”

Some unions, including the Royal College of Nursing (RCN), have described the sum as “shambolic” and “insulting”.

The RCN added that “the profession will not take this lying down”.

The organisation said the Treasury expects inflation to be 3.7%, so “ministers are knowingly cutting pay for an experienced nurse by over £200 in real-terms”.

The multi-millionaire Javid as a backbench MP has a base salary is £81,932 a year has a few sidelines, a contract with C3.ai sees him paid £151, 835 for working 80-86 hours a year – or between 10 and 12 days – according to the register of MP’s financial interests and of course he does his bit on the side carrying out a lucrative role as a senior adviser at  JP Morgan, earning a £150,000 salary for working the same number of hours as at C3. total pay works out to around £1,900 per hour.

“I’m sure that this pay rise will make a real difference to people’s lives… showing them how much we value and respect their incredible contribution to our nation.”

NHS staff are rightly receiving a pay rise this year.

I’m pleased to accept the independent pay review recommendation in full – with a 3% pay rise for all staff in scope, from doctors and nurses to paramedics and porters. pic.twitter.com/RT6a9ZpsGA

And in a statement, he said: “NHS staff are rightly receiving a pay rise this year despite the wider public sector pay pause, in recognition of their extraordinary efforts.

“We asked the independent pay review bodies for their recommendations and I’m pleased to accept them in full, with a 3% pay rise for all staff in scope, from doctors and nurses to paramedics and porters.

“We will back the NHS as we focus our efforts on getting through this pandemic and tackling the backlog of other health problems that has built up.”

This followed a day of confusion and rising tensions, the government dropped plans to make only 1.5% of the 3% uplift a permanent increase to salaries, with the other 1.5% in effect a one-off bonus. It came after staff groups warned privately that they would condemn any deal structured that way.

However, the government’s decision to exclude the NHS’s 61,000 junior doctors – all medics below the level of consultant – from the pay award is certain to cause deep unease among a key group of staff who undertook a series of strikes in 2015-16 in protest at a proposed new contract.

The pay rise offer comes after the Covid pandemic left hospitals overwhelmed and forced staff to adapt to full personal protective equipment and the cancellation of leave. Waiting lists have risen to a record 5 million patients.

Ministers stressed on Wednesday that they had accepted in full the recommendations of the two independent pay review bodies which advise the government on levels of NHS pay. The Department for Health and Social Care (DHSC) said 3% was a “recognition of the unique impact of the pandemic on the NHS”.

The 3% is for the 2021-22 financial year that began on 1 April, so will be backdated to then, the DHSC added. It will cover most NHS staff including nurses, paramedics, consultant doctors, dentists and salaried GPs but not doctors and dentists who are still in training.

“NHS staff are rightly receiving a pay rise this year despite the wider public sector pay pause, in recognition of their extraordinary efforts,” said Sajid Javid, the health secretary.

The DHSC disclosed the offer just before 6pm, hours after pulling the announcement at the last minute from a ministerial statement to MPs by the health minister Helen Whately. It did not explain why.

In March Sir Keir Starmer called for nurses to receive a pay hike of at least 2.1% but failed to back demands for a higher pay boost from unions.

Launching his campaign for May’s elections, the Labour leader targeted the Government’s widely criticised recommendation of a 1% raise for England’s health workers.

However, he is fully prepared to back nurses and use their just cause for a well-deserved pay rise as long as it’s what he calls a fair 2.1% or thereabouts and not the 12.5% that Nurses are demanding.

He said on Friday that “a vote for Labour is a vote to support our nurses”, but did not go as far as some supporters wanted in specifying the raise they deserve during the pandemic.

Starmer has demand at least 2.1% pay rise for nurses – but won’t say how much!

The Labour leader said frontline staff deserve ‘a fair pay rise’ rather than a real-terms cut in wages offered by Boris Johnson. On that, we can all agree but if Starmer wants to use the NHS as a bandwagon he should listen to the Unions and their demands.

It seems Labour have not learnt any lessons of the past when the choice given by the two main parties was how much ‘Austerity’ and how long over!

Healthcare staff have called for a real-terms pay increase.

Health unions criticised the 3% offer as “grossly inadequate” and “paltry” given frontline workers’ work in tackling the pandemic and the real-terms fall in income over the last decade, during which they received annual rises of just 1% or had their salaries frozen.

Organisations representing NHS trusts were more positive. Chris Hopson, chief executive of NHS Providers, welcomed the decision to ditch the 1% offer made earlier this year, which Boris Johnson had insisted showed ministers were giving NHS staff “as much as we can”.

But Hopson added: “It is disappointing to hear that the 3% rise has not been applied for all grades of staff, including junior doctors, as trust leaders emphasised the need for a fair deal to be applied across the whole workforce. Overall, this is a helpful improvement on the government’s initial 1% proposal, which understandably provoked widespread condemnation.”

“When the Treasury expected inflation to be 3.7%, ministers are knowingly cutting pay for an experienced nurse by over £200 in real terms,” said Pat Cullen, the acting general secretary of the Royal College of Nursing (RCN), which had argued for nurses to get a 12.5% rise.

Cullen warned that nurses in England could go on strike for the first time over the 3% offer. The RCN’s members in Scotland have already rejected a 4% offer from the Scottish government. “The profession will not take this lying down,” she said. “We will be consulting our members on what action they would like to take next.”

The RCN has set aside £35m to cover the costs of a potential strike and is training 25,000 members as workplace activists to help it ensure that at least half of members vote in any ballot, to comply with trade union laws brought in by the Conservatives.

Unite branded the pay offer “grossly inadequate and underwhelming, given the sacrifices health staff have made over the last 18 months combating coronavirus”. Rachel Harrison, a national officer with the GMB, said: “NHS workers know their worth and so do the public – shame on the government who don’t.” Both unions will consult their members to gauge the strength of feeling about the award.

Unions’ highly critical reaction raises the prospect of the government facing a period of significant discontent among NHS staff, especially nurses. Consultants, who were seeking a 5% increase, recently warned that they may refuse to do paid or unpaid overtime in protest.

Labour attacked ministers the “shoddy, ill-thought through” proposal and described it as another example of a government U-turn. Justin Madders, the shadow health minister, said: “After their hypocrisy applauding NHS workers while trying to cut their pay, the government must make our NHS and key workers feel supported and valued after all they have done for us.”

The Labour-run Welsh government also said it was awarding a 3% pay rise to NHS workers.