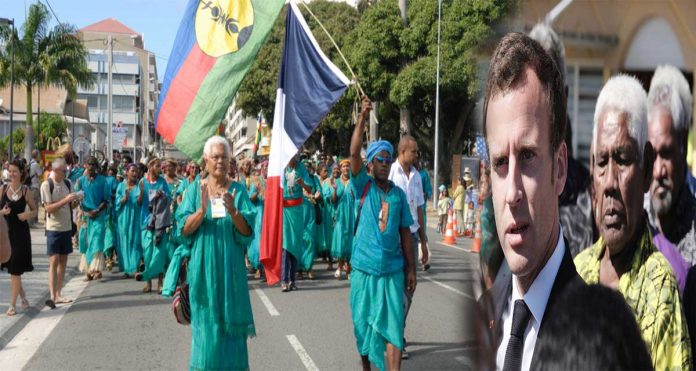 People living in New Caledonia will fight for independence from France. They’re preparing for a referendum on Sunday. Since September 1853, the cluster of islands became French. Around 175,000 New Caledonians, can cast their vote.

Roch Warmytan is the leader for the independence party FLNKS. He says, “This colonizing state, the French state, this state that colonized millions of people, this state that participated in unnamed massacres, this state, it is there and it doesn’t want to let go”

The country is situated in the southwest Pacific Ocean, east of Australia, and around 20,000 kms from France.

Sunday’s vote is key to settling tensions between the native Kanaks, who once suffered from strict segregation policies, and descendants of European colonizers. It is also a test of the depth of the links between France and the territory, which lies east of Australia and has about 270,000 inhabitants.

Voters have to answer the question “Do you want New Caledonia to gain full sovereignty and become independent?” Observers say that, based on past electoral results and polls, voters are likely to back remaining in France.

The territory enjoys a large degree of autonomy, but relies on the French state for its defense, police, foreign affairs, justice and education.

The referendum is the result of a process that started 30 years ago after years of violence that pitched pro-independence Kanak activists against those willing to remain in France.

In 1988, 19 Kanak tribesmen died after they took French police hostage in a cave on the New Caledonian island of Ouvea. Four soldiers were also killed.

The violence represented a “tremendous shock” and a “key moment” for France, French historian Isabelle Merle said. “This is the first time a carefully thought-through peaceful decolonization process has been considered,” she said.

The Ouvea events prompted a peace deal that year between rival loyalist and pro-independence factions that laid the ground for the referendum.

Visiting the territory in May, French President Emmanuel Macron acknowledged the “pain of colonization” and paid tribute to the courage of those involved in the peace process.

“We are no longer in a time of possession, but a time of choice”, he said.

Under French colonial rule, the Kanaks were forced to live on reserves in remote areas, pay specific taxes and do mandatory work for very low wages. They had to respect curfews and were not allowed into some places reserved for European settlers.

Merle, whose researches focus on France’s decolonization process, said this led to “a big gap between the local communities.”

“In the whole French colonial emprise, the Kanaks have probably been those who have been despised the most, in the sense that they were seen as savages,” she said.

The President of the League for Human Rights in Caledonia thinks France has done a lot recently for the indigenous people.

Elie Poigoune President of the League for Human Rights says, “I have a look now, a lot has changed towards France. France, before, it was colonial, it was hard on us, but recently it has shown a benevolent, attentive look at all the populations of its territory, and in particular the Kanak population.”

Looking at the polls, it suggests that the majority of people will vote against independence.

But a flagging economy and feelings of exploitation over the centuries, could mean thousands of people will vote on the 4th of November.

Few expect that the Sunday’s referendum leads to Caledonia’s independence with opinion polls suggesting between 69 and 75 percent will vote against it.

Hundreds of security personnel have been stationed around the island to avert any possible violence.

Results are expected to be released on Monday as French Prime Minister Edouard Philippe will be visiting the capital Noumea.

In the event of independence, France will continue to provide services and finance to the territory for a limited time. It will then pass a law that “will mark the end of New Caledonia’s membership” of the republic.

It will no longer use the French flag and its proposed name would be ‘Kanaky Nouvelle Caledonie’, recognizing both the Indigenous and colonial history.

President Emmanuel Macron has previously said he hopes that New Caledonia will remain in France, but said that his government will not take sides in the referendum.

Don’t split the left: an open letter from Unite members