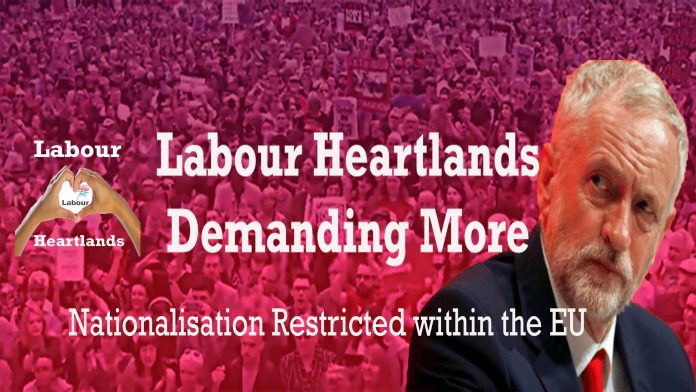 Jeremy Corbyn claimed a socialist manifesto might be restricted by the European Union’s rules on state aid if the UK tried to stay in the single market.

On the 24th of September, Jeremy Corbyn told the Andrew Marr Show the single market “has within it restrictions in state aid and state spending. That has pressures on it through the European Union to privatise rail for example and other services.”

The Remain camp would dismiss this and try to paint over the facts but it is clear to anyone who looks deeply enough that the EU is not in favour of Nationalisation or state aid.

This can clearly be seen in how the EU forced Électricité de France popularly known as EDF a state-owned EPIC, it became the main electricity generation and distribution company in France, enjoying a monopoly in electricity generation, although some small local distributors were retained by the nationalisation. This monopoly ended in 1999 when EDF was forced by a European Directive to open up 20% of its business to competitors.

Note the fact that EDF was forced to open up to competitors due to EDF’s monopoly. Nationalisation of utilities and rail in all senses of the word is a Monopoly and can be no other, it is on this bases that EU rules and regulations will not allow Labour’s manifesto to be implemented in full.

Using France once again Remainers point out that French water is nationalised this is far from true, France has a number of water companies that are owned by Towns or cities, they may be in public hands but are not state-owned in toll throughout France this equates to just 60% of Frances water suppliers.

Is often cited as state-owned yet, in reality, the state own only 70% of the company.

February 1, 1987, City Hall forms a semi-public company (SEM) to ensure drinking water production. It is called SAGEP (Société anonyme de gestion des eaux de Paris) and the City of Paris owns a 70% stake in its capital. It would be renamed Eau de Paris on January 1, 2005.

November 24, 2008, The Council of Paris votes to return its water service to public management. A public industrial and commercial company (EPIC) is created. May 1, 2009

The new Eau de Paris EPIC replaces the former SEM for water production and transportation. It incorporates part of the CRECEP teams from the departmental laboratory in charge of monitoring water quality.

January 1, 2010, Eau de Paris becomes the sole municipal operator for the French capital’s public water service ensuring global business, from catchment to invoicing. July 1, 2011, Eau de Paris internalizes subscriber management which was formerly outsourced to the different distribution companies. This was the final step in the return to public management.

The note here is MANAGEMENT, not 100% State owned.

While the one thing that is true at this moment in time is the state-owned railways but the disappointing news there is that the EU has moved forward on the Fourth railway package.

The 4th Railway Package is a set of 6 legislative texts designed to complete the single market for Rail services (Single European Railway Area). Its overarching goal is to revitalise the rail sector and make it more competitive vis-à-vis other modes of transport. It comprises two ‘pillars’ which have been negotiated largely in parallel:

The market pillar will complete the process of gradual market opening started with the 1st railway package. It establishes the general right for railway undertakings established in one Member State to operate all types of passenger services everywhere in the EU, lays down rules aimed at improving impartiality in the governance of railway infrastructure and preventing discrimination and introduces the principle of mandatory tendering for public service contracts in rail. Competition in rail passenger service markets will encourage railway operators to become more responsive to customer needs, improve the quality of their services and their cost-effectiveness.   The competitive tendering of public service contracts will enable savings of public money.  The market pillar is expected to deliver more choice and better quality of rail services for European citizens, these being the overriding objectives.

Proposals under the 4th railway package have four main aims:

The RMT union are very clear on the issue of privatisation of Rail throughout the EU and it will begin in 2019.

Yes Nationalisation within the EU is possible but only in part!

So what’s to stop the UK from the nationalisation of Rail and Utilities?

Colin Powell Former US secretary of state who lied at United...