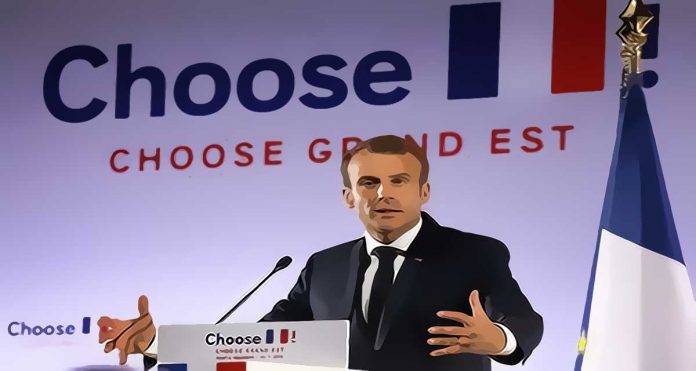 Macron performs political somersault and bashes the EU for failing to protect workers.

WORKER-BASHING French President Emmanuel Macron did a political somersault, attacking the European Union for failing to protect the less well off as it pushes its neoliberal agenda.

In his first appearance on a radio talk show since he was sworn in, the increasingly unpopular French president came out swinging against an EU he is better known for defending.

His scarcely credible change of heart followed a humiliating national opinion poll signalling that his Republique En Marche party is running second in voting intentions in the run-up to next May’s elections to the European Parliament behind the Rassemblement National of fascist leader Marine Le Pen.

Before today’s outburst, Mr Macron’s stance in recent months has been to frame the EU elections as a battle between anti-immigrant nationalists and pro-EU “progressives.”

The EU is letting down its middle classes, ignoring their legitimate fears and exposing itself to a populist wave that could ultimately submerge the bloc, Macron told Europe 1 radio a few months before his centrist La République En Marche starts campaigning for the European Parliament election.

“Europe, without a doubt, has become too ultra-liberal,” he said, adding: “We need a stronger Europe that protects.”

The criticism made it sound like Macron, who used the European Union’s “Ode to Joy” anthem as the soundtrack to his inauguration at the Louvre in 2017, might be turning against the EU. In France the expression “ultra-liberal” is not a positive one — it refers to unrestrained capitalism that crushes the common worker and enriches elites.

But the chances that Macron has suddenly morphed into a Eurosceptic are next to nil. What’s more likely is that the French president, whose approval score has plummeted to around 20 percent in some polls, was lashing out at his opponents in the European Union, naming his enemies and setting the stage for a campaign to grab power in Brussels.

His target was not the right-leaning populists who oppose him face-to-face. By railing against European “ultra-liberals,” Macron was pointing to all the factions that have resisted his plans, articulated during his presidential campaign and during a landmark speech at the Sorbonne in Paris, to make the EU a more “protective” bloc via tighter security cooperation, taxes on digital giants and tougher restrictions on state-aid takeovers.

To an extent, that resistance has come from within the European Commission, where proponents of free trade never embraced Macron’s theory of “smart protectionism” in trade. But even more so, it’s come from countries including the free-trading Nordics, the market-friendly Netherlands, the libertarian Baltic states and, increasingly, conservative-led Germany, which oppose his plans.

“We need to hear the fear and anger. There’s anger against a Europe that has become too ultra-liberal,” the president, who has been a major advocate of this pro-corporate policy, told France’s Europe 1 radio.

“This anger is directed at an ultra-liberal Europe that no longer allows our middle classes to live decently,” he said using the US formulation for working people.

An Ifop survey published on Sunday showed that the far-right Rassemblement National has moved ahead of Mr Macron’s party for the first time.

The French leader linked Britain’s vote to leave the EU to similar working-class disenchantment with the EU and the City of London.

“When Britain decides to leave Europe, it’s the middle classes that say: “This Europe that you’re selling me makes the City better off but I, in the country or industrial towns, I’m worse off,” he said, “We need to hear that, so we need a Europe that protects workers more.”

On Tuesday he addressed voters’ concerns that have boosted support for far-right and eurosceptic parties in France, and drew parallels with Britain’s departure from the EU.

It seems he is trying to play both sides of the coin scrambling to holt the drop in his plummeting popularity.