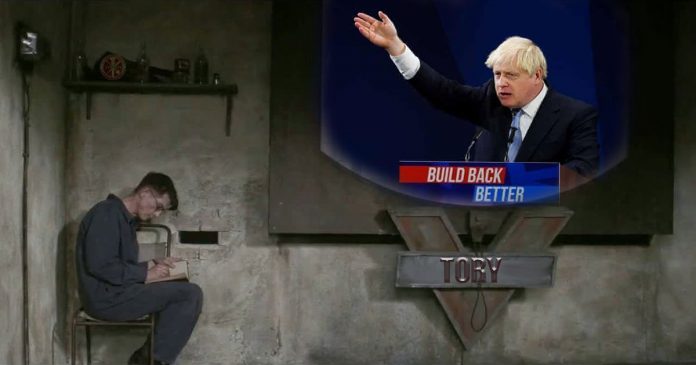 Doublespeak is a language that deliberately obscures, disguises, distorts, or reverses the meaning of words. Doublespeak may take the form of euphemisms (e.g., “downsizing” for layoffs and “servicing the target” for bombing), in which case it is primarily meant to make the truth sound more palatable.

It may also refer to intentional ambiguity in language or to actual inversions of meaning. In such cases, doublespeak disguises the nature of the truth.

The word is comparable to George Orwell’s Newspeak and Doublethink as used in his book Nineteen Eighty-Four, though the term Doublespeak does not appear there.

Doublespeak is most closely associated with political language.

Boris Johnson speech at The Tory Party conference echoed yet another meaningless slogan, ‘levelling up’.

The Prime minister has branded levelling up “the greatest project that any government can embark on” in his closing speech at the Conservative Party’s annual conference.

In his keynote address marking the end of the four-day event, the prime minister pledged that his top team will “get on with our job of uniting and levelling up across the UK” as the country recovers from the coronavirus pandemic.

Johnson said the UK has one of the most “imbalanced societies and lop-sided economies” when compared to other richer countries and said the Conservative Party’s mission “is to promote opportunity with every tool we have”.

The Universal Credit uplift ends today for the poorest workers of our society. Levelling up for nearly 6 million people starts with the cutting of £1000 a year from their much-needed tax credits.

In response to the pandemic, a temporary £20 increase to universal credit payments was introduced.

The scheme officially ends on 6 October.

However, the exact date the money will stop being paid will vary depending on which day people usually receive universal credit.

The government insists the £20 a week was only ever meant to be a temporary measure to help people through the COVID pandemic.

The calculations come from the Resolution Foundation, a think tank which focuses on people on lower incomes.

This cut will be a devastating blow for millions of households already struggling to make ends meet.

Therese Coffey jumped up and down and danced with abandon at a Tory conference karaoke party last night.

The Work and Pensions Secretary sang the uplifting 1987 power ballad, made famous in the film Dirty Dancing, with fellow Tory minister Will Quince.

Today she oversees the end of the £20-a-week Universal Credit uplift, the biggest overnight welfare cut since the Second World War.

The 18-month-long Covid benefit will be removed from payments arriving between October 13 and November 12, plunging hundreds of thousands into poverty and affecting more than 3million children.

Her dismissal of the affect this will have on the millions of working poor can be expressed in her ignorance when she stated: “People who lose £20 a week from their Universal Credit payments under Government plans could work extra hours to make up for the cut.

Under the rules, universal credit payments become less generous as income rises. So, a £20 a week increase in wages will not make up for the reduced benefits income.

Universal credit is claimed by more than 5.8 million people in England, Scotland and Wales.

Almost 40% of them are classed as being in employment.

Based on individual claimants’ payment dates, around 6 million low-income families will lose £1,040 from their annual income. It would create serious financial hardship and leave 500,000 people to be swept into poverty – including 200,000 children.

The JRF states: Around 6 in 10 of all single-parent families will be affected by this, and despite the Government’s commitment to ‘levelling up’ the impact of the cut will be the greatest across the North of England, Wales, the West Midlands and Northern Ireland.

The planned cut to Universal Credit and Working Tax Credit in October:

Writing on Twitter, Resolution chief executive Torsten Bell said that removing the boost would mean “4.4 million households, with 5.1m adults and 3.5m children, will see their incomes fall by £1,000 overnight.

“For 1 million households that will mean an immediate loss of over 10% of their income as we take the basic rate of benefits to its lowest level since 1990.”

The charity Citizens Advice has warned that a third of people on universal credit will end up in debt when the extra payment is removed.

It said the average shortfall would be between £51 and £55 a month.

Another charity, the Health Foundation, warned that the cut could lead to poorer mental health and wellbeing for thousands of families.

The withdrawal of the universal credit uplift coincides with increases in the cost of living.

The Bank of England has forecast that inflation (the rate prices increase) will rise above 4% in the coming months. This pace is unlikely to be matched by wage growth in many sectors of the economy.

Grocery and petrol prices are also going up.

“Today, the UK govt has cut #UniversalCredit by £20/week.

This cut will leave many with no option but to go hungry or cold in their homes as energy prices soar. But we’re not giving up.

Stay tuned for our announcement tomorrow.

Today, the UK govt has cut #UniversalCredit by £20/week.

This cut will leave many with no option but to go hungry or cold in their homes as energy prices soar. But we’re not giving up.

Where can I go for help?

There is free guidance and advice available, including: