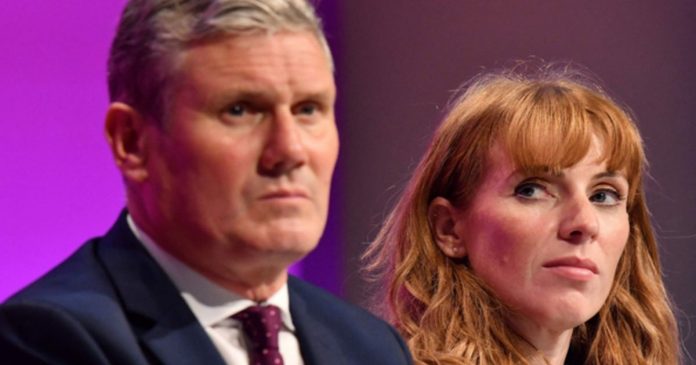 By now people are very used to the attacks on Left-wing members of the Labour party, predominantly those that express socialist values or have shown support for Jeremy Corbyn.

We have also witnessed the ostracisation of the Bennites, LeFT supporters and traditional Labour voters in our Red wall areas for practising their democratic right in voting ‘not’ to belong to a neoliberal EU, a position taken up by more than 33 percent of Labour members at the time, yet one that as witnessed banishment from social media groups and venomous attacks from the centrist supporting Liberal elite.

Lately, there have been purges of left-wing activist and socialist advocating groups, Labour’s mass expulsions of now prescribed groups that of course comes with the continued persecution of the wrong sort of Jews!

This is the quiet front of Labour’s civil war, the one that doesn’t get much media attention, Starmer’s continued unabashed attacks on Jewish members of the Labour party. The mainstream media ignored headline from reports that shows Sir Keir Starmer’s Labour “is purging Jews from the party” – with Jews almost five times more likely to face antisemitism charges than non-Jewish members. You can bet if this was happening under Corbyn’s leadership with the weaponisation of antisemitism it would be the headline of all the MSM news, especially the Guardians.

The ignored report states that British Jews are experiencing “discrimination, victimisation and harassment” inside Starmer’s supposed safe UK’s Labour Party. But of course, it comes after Starmer changes the definitions of what he constitutes as antisemitism. It’s no longer a case of Starmer not tolerating antisemitism but as he stated in the recent Labour friends of Israel dinner party: “anti-Zionism had no place in the Labour Party” going on to describe it as a type of antisemitism, in effect he declared no criticism of Israel will be tolerated, it seems a strange sort of international socialism when standing in solidarity with the oppressed and criticising a state that is carrying out apartheid while occupying another country is not tolerated.

For the log, that resolution was overturned United Nations General Assembly Resolution 46/86, adopted on 16 December 1991, revoked the determination in Resolution 3379, which had called Zionism a form of racism. Israel had made revocation of Resolution 3379 a condition of its participation in the Madrid Peace Conference, in progress in the last quarter of 1991.

The resolution was raised under pressure from the administration of US President George H.W. Bush.[16] The text of the revocation was simply:

Labour the Party of Business.

Then we have Labour’s attack on workers and the Unions, Starmer seems so keen to distance the Labour Party from the workers and unions that created it the Unions have had no choice but to cut funding and in some cases disaffiliate entirely.

Recently Starmer declared the Labour Party the Party of Bussines in a weak attempt to woo the CBI the party announced a number of pro-business policies in recent months, including a promise to scrap business rates and replace them with a system less punitive for firms with a high street presence.

In another move apparently pitched at business, Starmer also irked Miliband at the party’s annual conference by pledging not to nationalise the “Big Six” energy firms, a possibility Miliband had left open in interviews and felt shouldn’t yet have been taken off the table.

Labour’s conference also saw the abrupt resignation of shadow business minister Andy McDonald, after he was told to oppose a £15-an-hour minimum wage – a reminder of scepticism on the left of the party about Starmer’s direction.

We also witnessed the Mayor of London Sadiq Khan making derogatory tweets about the RMT union and its ongoing justifiable strike.

Over the weekend she tweeted criticism of Khan over his claim that a tube strike was “unnecessary” and had caused “widespread disruption” at the worst possible time. Graham tweeted: “Workers are turning away from @UKlabour when a Labour mayor attacks workers. It’s about time the @MayorofLondon did the right thing and stood up for workers not just at election time but when it matters.”

With so many fronts you have to wonder is it just his narcissistic nature or is he so set on the Labour Parties destruction he thinks opening another front won’t matter.

What is clear after his reshuffle, Angela Rayner is now the odd one out at Starmer’s head table, a northern working class girl sat with a bunch of liberal elites, you can almost feel the prejudice just thinking about it.

Starmer has repeatedly denied any rift with his deputy, who cannot be sacked from her position because she was directly elected by party members.

There are many that would suggest Angela Rayner is getting her just deserts after her own attacks on Left-wing elements of the Labour Party, however, Starmer obviously sees merit in bringing Reyner to heel. His recent pettiness has been apparent when during what for many was a very powerful and hard-hitting attack at the Tories by Angela Rayner who called out their blatant corruption was then immediately undermined by Starmer declaring a shadow cabinet reshuffle, ultimately shifting media attention to the live announcements that continued all day.

Allies of Angela Rayner insisted that while she met the Labour leader between her broadcast round on Monday morning and her speech at 11am, she was not told the reshuffle would be imminent or consulted about any of the details.

One Rayner ally said Starmer would have been fully aware the reshuffle would “blow up” her attempt to lay out plans for reforming the standards system and said it was “not fair”. A second said she had been “gazumped” and complained at the “utterly bizarre” timing.

It followed another botched reshuffle in May in which the deputy leader resisted Starmer’s attempt to strip her of some of her responsibilities.

The latest attack comes just a few days after Starmer’s ‘News blocked’ Reyner, a senior aide to the deputy leader has been suspended from the party, in an apparent sign of a deepening power struggle between her and Sir Keir Starmer.

Rayner’s head of communications Jack McKenna has been placed under investigation on suspicion of a personal data breach relating to another Labour staff member.

It is understood that he denies any wrongdoing and is consulting his union.

Mr McKenna manages the deputy leader’s relations with the media as well as writing her speeches, and has previously been forced to deny rumours that he briefed reporters about differences between Starmer and Rayner.

He is understood to have learnt of his suspension from a reporter with the Sunday Times, raising questions about the party’s handling of his own personal data.

Starmer has repeatedly denied any rift with his deputy, who cannot be sacked from her position because she was directly elected by party members.

In an interview published just hours before Mr McKenna’s suspension, Sir Keir said: There is no personal issue between me and Angela. We’re friends, we get on, we talk a lot.

“We bring different things to the table . . . the two of us together make each other stronger. She’s politically astute and invaluable to me as a deputy leader and to the party.”

The Sunday Times reported that McKenna’s suspension was understood to be linked to a now-deleted tweet by a journalist referring to a row between shadow Scotland secretary Ian Murray and Labour’s head of policy, Claire Ainsley about whether one of his aides would be sacked. Labour headquarters is investigating a claim that McKenna breached “personal data” by briefing the press about the row.

Many people will also suggest Angela Rayner is getting what she deserved. That is a possibility, however, rarely do people get what they deserve, if they did many of us would be in a better place and many more much worst.

Labour’s deputy leader Angela Rayner promised to suspend “thousands and thousands” of party members unless they “get real” about antisemitism.

Speaking during the Jewish Labour Movement’s virtual One Day Conference, she warned Labour members: “If I have to suspend thousands and thousands of members, we will do that.”

It seems that was just the first wave, let’s see how she and others cope with this new front that Starmer has opened up.

What is very clear is the Labour party no longer stands in solidarity along the roadside is Starmer’s disregarded promise of unity. The broadchurch that was once the Labour party has turned into a free for all fight that will ultimately see its own destruction.