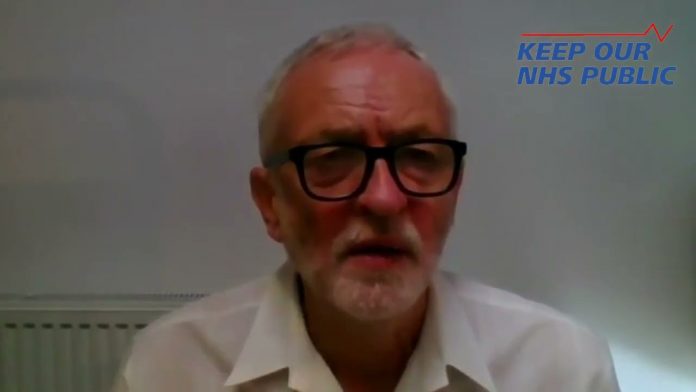 Jeremy Corbyn brought to the front the constant battle the public have had since the NHS was founded, corporate takeover.

The integration and innovation white paper was published by government in February 2021.  It set out proposed reforms to be included in a Health & Care Bill (the Bill) claiming to restructure parts of the NHS in England and create a ‘truly integrated’ healthcare system with less bureaucracy.

The proposals for new Integrated Care Systems (ICS) boards, will allow new bodies within the NHS designed to bring together all groups working within the health service to work on public health strategy. Campaigners have warned that the forthcoming Bill would allow private companies to sit on such decision making boards.

Currently, Section 75 of the 2012 Health and Social Care Act requires a process of compulsory competitive tendering for NHS services. The Government’s new legislation would end this requirement, which campaigners claim would make it much easier for services to be contracted to the private sector without checks.

“It should be called the corporate takeover bill”

?️ “It should be called the corporate takeover bill” ?️

She said: “It will put on steroids the cronyism we’ve seen in this pandemic, where Tory mates and donors having handed billions of pounds in dodgy Covid Government contracts, and it will implement a healthcare model that incentivises cuts and closures, rationing funding to health boards. This dangerous Bill is another step to privatisation.”

Labour’s Bill Esterson added: “Private companies on new health boards and the centralisation of power points to a potential consolidation of the cronyism and privatisation that has characterised the Conservatives’ approach to the Covid crisis.”

Tory MP Peter Aldous raised concerns over a lack of NHS dentistry, saying: “There are potential pitfalls, particularly from my own perspective, changing ICS boundaries and I would urge the minister to avoid this at all costs.”

We Own It’s campaigns officer Pascale Robinson said: “Over the last year, our NHS has been the lifeblood of our country – keeping so many of us safe during the pandemic. The last thing it needs right now is a dangerous and damaging overhaul which would put the private sector at the heart of our health service – and the public know it.

“It’s frankly disgraceful that MPs have voted to support this legislation, which is nothing short of a Corporate Takeover Bill and would allow profit private companies – the likes of Virgin Care and Serco – to sit on boards making calls on where NHS money gets spent.

“This private oversight of our healthcare will undermine the principles at the core of the NHS.

“If the Government cares about the future of our NHS and what the public want from it, they should rethink and withdraw this reckless Health and Care Bill. We cannot allow this corporate takeover to go ahead.”

The Bill will not solve the NHS’s problems. It introduces many harmful changes such as:

You can help fight the legislation by signing this petition LINK