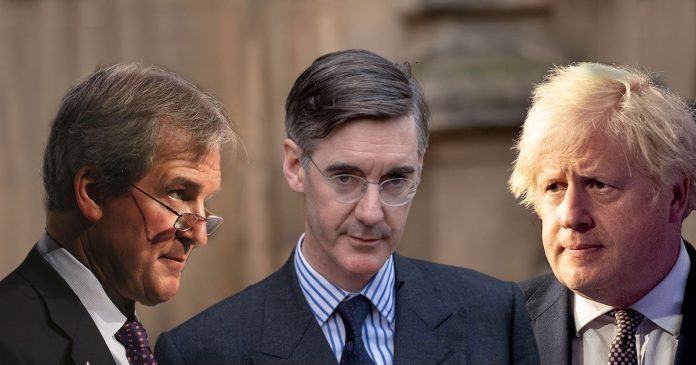 The backlash from this week’s attempt to corrupt and pervert the parliamentary process escalates.

Following Owen Paterson being found guilty of breaking the code of conduct rules, of which he was found to have “breached the rules prohibiting paid advocacy” the outrage continues to revibrate through the halls of Westminster.

As the leader of the house, it is Jacob Rees-Mogg who must pay the price for that attempt at parliamentary corruption.

On October 26, at the end of an investigation started in 2019, the Commons standards committee, a group of cross-party of MPs and “lay members” assigned to investigate the standards of behaviour for MPs, published a near-200-page report on Paterson’s recent business and political dealings.

They found him to have “breached the rule prohibiting paid advocacy” in the code of conduct for MPs in the way he represented Randox and Lynn’s Country Foods in meetings with government departments, as well as breaking rules on the declaration of interests and the use of parliamentary facilities.

These breaches relate to ten approaches to the Food Standards Agency representing the companies, and four approaches to ministers at the Department for International Development, according to the report, which accuses him of furthering the interests of the companies.

Paterson has always insisted that he was acting in the public interest and that the benefits to companies who paid him more than £112k a year were secondary.

The committee revealed Paterson had failed to declare his interest and used his parliamentary office on at least 16 occasions for business meetings with his clients between October 2016 and February 2020, and sent two letters relating to his business interests on taxpayer-funded Commons-headed notepaper.

Paterson was also found to have committed “an egregious case of paid advocacy”, “repeatedly used his privileged position to benefit two companies for whom he was a paid consultant”, and brought the Commons into disrepute. It said: “No previous case of paid advocacy has seen so many breaches or such a clear pattern of behaviour in failing to separate private and public interests.”

The committee recommended Paterson be suspended from the Commons for 30 sitting days.

Under a law introduced in the wake of the MPs’ expenses scandal, any MP suspended for more than 10 days can face a trigger ballot where their constituents decide whether to force a byelection by supporting a recall petition. Ten per cent of the electors in Paterson’s seat would need to support the petition for a byelection to be called.

It was at this point the old boy’s network moved and decided the rules don’t apply to them.

At Prime Minister’s Questions, Boris Johnson said MPs found to have broken the rules should get a right of appeal, as would happen with doctors and teachers found guilty of misconduct.

But the SNP’s Pete Wishart accused the government of “attempting to turn back the clock to the worst examples of 1990s Tory sleaze”.

On Wednesday, Conservative MPs blocked the Standards Committee’s recommendation that Mr Paterson should be suspended by calling for an overhaul of the MPs’ standards watchdog instead.

Dame Andrea Leadsom, put forward an amendment, to sets up a new select committee which will examine the parliamentary standards system and recommend whether to review the case.

Mr Paterson said the move would allow him to clear his name after “two years of hell”, but anti-corruption campaigners, unions, political observers and Opposition MPs condemned the decision, with the Tories accused of “wallowing in sleaze”.

Ahead of the vote, the committee’s Labour chairman Chris Bryant told MPs Mr Paterson had lobbied ministers “time and again, in a way that conferred a direct benefit on his paying clients”.

“That is expressly forbidden. It is a corrupt practice,” he added.

He said Mr Paterson had been given “every opportunity” to put his case across – and his arguments had been heard “respectfully and fairly”.

Ministers had placed Tories under a three-line whip to support the amendment. The House voted 250 to 232, majority 18, to approve it.

The result allowed Owen Paterson to escape suspension from the Commons for 30 days, and a possible byelection.

The vote was met with cries of “shame” from opposition MPs.

The prime minister was forced to U-turn over the plan to prevent Paterson, facing a 30-day Commons suspension for a serious breach of lobbying rules.

But it is MP Jacob Rees-Mogg who must carry the can with gathering calls saying he ‘should resign’ as the Leader of the House of Commons in the wake of last week’s furore over Owen Paterson, it’s been claimed.

It was Rees-Mogg who had led the Commons debate for the government last week as Downing Street ordered Tory MPs to block Paterson being suspended. The Commons leader then had to appear in parliament the next day to announce the U-turn.

The shadow leader of the Commons, Thangam Debbonaire, said Rees-Mogg’s position had become untenable because of the role he played in getting Conservative MPs to vote for a motion that would spare Paterson the proposed 30-day suspension he faced for breaking lobbying rules.

Opening the debate on Wednesday, Rees-Mogg defended the decision to link saving Paterson from suspension with another plan – set out in the same amendment – to review the way the standards committee operates. He brushed aside complaints that it was a mistake to link the two issues, and that the government appeared to be retrospectively changing the rules to protect a former Tory minister.

In an interview with Sky’s Trevor Phillips on Sunday, Debbonaire said: “If I was him I would be considering my position, and that’s what I think he should do today.” Asked whether she was saying Rees-Mogg should resign, Debbonaire replied: “I think his position is untenable, yes.”

Debbonaire said that despite the government U-turn on Thursday, Rees-Mogg had left the Commons “in a state of chaos”. She said the motion passed on Wednesday declining to back the standards committee report into Paterson still applied, and that the government should let MPs vote to rescind it before the Commons begins a short recess on Wednesday.

She also said ministers should rule out giving Paterson a peerage, something Downing Street declined to do on Friday.

In an interview with the same programme, the environment secretary, George Eustice, dismissed the controversy about the Paterson vote as a “Westminster storm in a teacup”. He said the government had made a mistake in proposing the amendment in the way that it did, but claimed there was widespread support for the principle of changing the standards process to include a right of appeal.

Eustice also said the former prime minister John Major was wrong to have claimed in an interview on Saturday that the government’s handling of the matter had been “shameful”.

Referring to Sir Major’s criticisms of Brexit, Eustice said: “He’s wrong. I disagree with John Major on a quite a few issues. He’s not somebody whose cue I would normally take.”