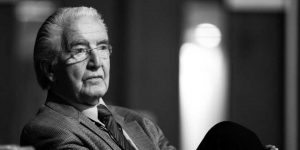 ‘When I hear Tories and the purple-faced UKIP go on now about Poles, Romanians and Bulgarians coming to Britain to work, I think back and remember what Mrs Thatcher did.

She signed the 1986 Single European Act to create the free market of people.

She was championing the eastwards expansion of the European Union into the former Soviet satellites.

She wanted the EU to embrace that part of the world to roll back the Iron Curtain, and stick it to Mikhail Gorbachev and Communists.

The Single Market was designed deliberately to allow employees to transfer cheap labour across national borders.

It wasn’t principally about letting workers decide where they’d look for jobs.

That’s a by-product. The Single Market’s main aim was to supply cut-price workers to capitalism.

A capitalism with an insatiable appetite for the dozen-a-penny workers she created by stripping away employment rights, by shackling trade unions.

The problems we wrestle with today can be traced back to her door.’

But it’s been worse over the last 40 years dealing with the consequences of the 30,000 corporate lobbyists who have determined EU policy and become more influential in recent times, aided and abetted by the compliant EU Parliament which has leaned ever more to the right.

At the heart of the worldwide neoliberal period was the freedom of capital from national constraints.

In Britain, the first move on behalf of this was made three years after the country agreed to stay in the EU club in the 1975 referendum. In October 1979 Margaret Thatcher abandoned exchange controls on capital.

This opened Pandora’s box and was the key employers’ plan throughout the EU.

Prior to this, there was a longstanding political consensus that there needed to be exchange controls on the export of capital. It was illegal to ship wealth generated in Britain overseas.

Remember there were even tightly controlled restrictions on the amount of cash holidaymakers could take out of the country on foreign holidays.

This policy was a legacy of the post-war social democracy which aspired to full employment, the primacy of manufacturing production, nationalisation of utilities, services and industries and a coherent nationwide economic policy uniting England, Scotland and Wales.

It was a policy linked also to industrial planning and labour market planning based on collective bargaining and the concession after bitter struggles of workplace rights and equality.

As soon as capital could flow, the speculators in money markets took over. There was more to be made by gambling than long-term investments in making things. There were even EU subsidies for companies to move out of Britain into lower-wage areas of Europe.

As capital globalised, so goods and services started to flow and national assets like fishing and agriculture became subservient to the international plunder of the markets.

Britain’s balance of trade started to decline and especially with the EU it ran into deficit. It has stayed there ever since.

When capital is free to roam, so it demands that labour should. Weaker economies in the EU thought they could solve their problems by exporting millions of workers and young talent across the continent.

Such enforced migrations have now worsened economic problems where countries have been deprived of new talent and skilled workers.

Such movements have been backed up by European Court of Justice rulings that have relentlessly backed businesses keen to move labour from one place to another regardless of national collective bargaining agreements.

The notorious cases of Ruffert, Viking and Laval remain in force. The break-up of collective bargaining was a condition of entry to the EU in all of the new accession states.

Furthermore, the extensive labour codes and protections gained through struggle in many of the most unionised European countries have been under systematic attack.

Most recently in France, Italy and Greece, no expense has been spared by employers and the EU to tear up the labour codes.

The adoration of the EU by some British trade unionists has sadly suspended our usual internationalism as far as assisting our closest neighbours is concerned.

It is an embarrassment to some pro-EU trade unionists to think we might have to give solidarity to trade unions next door as they are forced to defend their most fundamental rights.

Because of the particular traditions and successes of the trade unions in Britain, a better fabric of employment protection was in place than in many places.

Thatcher was an ardent EU fan for most of her life and she and the Tories signed the Single European Act and of course round after round of anti-worker and anti-trade union legislation.

After the miners’ dispute, the dockers and Wapping, some in the movement were in despair and the pathetic straws and carrots offered by then EU commission president Jacques Delors came to the 1988 TUC and offered a false sense of security.

In return for joining the single market, we would get workers’ rights and milk and honey flowing from every employer’s hand.

Has that happened? Has the EU boosted our rights and economy since then? Has it intervened to stop foodbanks, stop the anti-union legislation, stop the gross inequalities, stop the deregulation that sees disgraceful, inhuman events like Grenfell?

The EU was based on a continental plan that sought to ensure that no individual country would have the economic, therefore the political, wherewithal to be strong and independent and therefore socialist.

Germany would get wealth-creating engineering and Britain would be the banker. There would be loadsamoney around the City of London and loads of our money flowing out to the international roulette. Industry and productive capacity in the rest of the countries would be run down.

As capital flew away, so the key indicator of investment in research and development and skills in Britain dropped way down the international league tables and, of course, youth unemployment rose.

We have absolutely no chance of ever investing in all areas of our country, and rebuilding and developing new industries, growing public services and taking back control of railways and utilities if capital is allowed to freely flow as the single market and EU demand it must.

There should be a basic right for any worker to be able to live and prosper in their country of birth without being forced to flee through poverty and war and the theft of capital from their own country.

The free flow of capital causes the misery of the free movement of labour.

Manuel Bueno Del Carpio is a national officer of Trade Unionists Against the EU and a lifelong anti-EU activist.