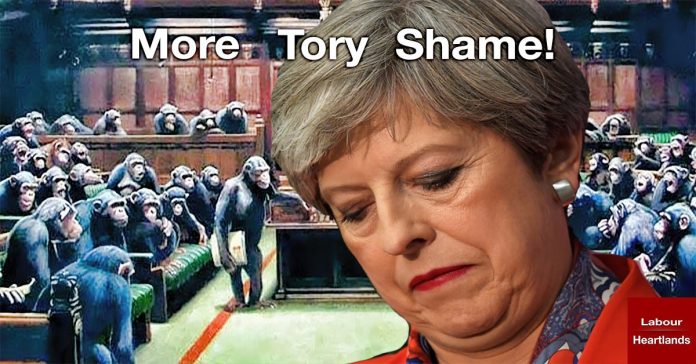 Jeremy Corbyn launched a devastating tear down of the government’s welfare policies telling MPs that “foodbanks are not just a photo opportunity for Conservative MPs.”

In a stinging attack the Labour leader accused the Tories of creating a “hostile environment” for those on benefits.

He referred to a string of photographs of Tory MPs at foodbanks in their constituencies which have been promoted on social media in recent weeks.

Mr Corbyn was visibly angered when the Prime Minister dismissed again the findings of the UN Special Rapporteur who said the Government’s policies and drastic cuts were “entrenching high levels of poverty and inflicting “unnecessary” hardship in one of the richest countries in the world.

Asked which part of the report she found most shocking, Theresa May responded: “We have been clear as (Work and Pensions Secretary Amber Rudd) has been, that we don’t agree with this report because what we actually see in our country today is absolute poverty at record lows, more people in work than ever before, youth unemployment almost halved, wages growing – and that’s because of the balanced approach we take to our economy.”

“One of the Government’s policies that is causing the greatest anxiety and poverty is Universal Credit, the UN rapporteur Professor Alston said it was fast falling into universal discredit.

“When will the Prime Minister demonstrate some of her professed concern about burning injustices and halt the roll-out of Universal Credit?”

Fury erupted on the Tory benches after Mr Corbyn, during his final question, said: “When I hear a Prime Minister talking about difficult decisions, what always happens afterwards in this context is the poorest lose out in our society – 4.3 million disabled people are now in poverty, 50,000 were hit by appalling cuts to the Employment Support Allowance benefit alone last year.

“This Government labelled disabled people scroungers, it called those unable to work skivers…”

Mrs May could be seen saying “outrageous”, while Tory colleagues shouted “Withdraw!” at Mr Corbyn, which prompted Commons Speaker John Bercow to intervene.

Labour clears the way: To Human Rights violations that will give the government a free pass on torture

Why Govt chief scientific adviser’s Conflict of interest in COVID vaccine is more than just cause for concern.

Labour clears the way: To Human Rights violations that will give...