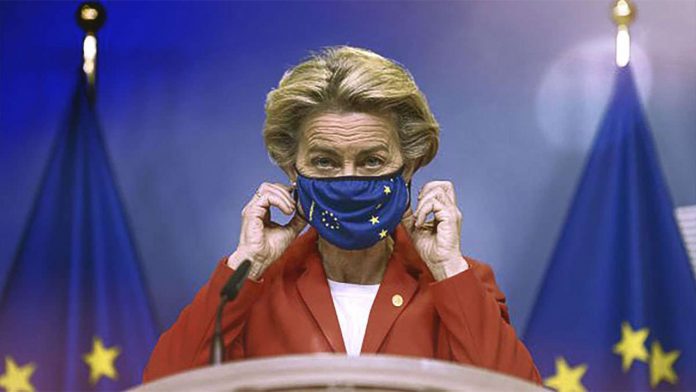 The EU has agreed to a standstill in legal action against the UK for breaches to the Northern Ireland protocol, Euronews has learned.

The European Commission initiated infringement proceedings against the UK government last March after it unilaterally extended Grace Periods on goods no longer allowed to be exported to Northern Ireland due to Brexit.

A Brussels spokesperson has said: “In order to provide the necessary space to reflect on these issues and find durable solutions to the implementation of the Protocol, we have decided, at this stage, not to move to the next stage of the infringement procedure.”

The legal action was started in March after the UK took unilateral action to change the implementation of the protocol.

At that time the UK delayed new checks on food, parcels and pets entering Northern Ireland from Great Britain.

The Northern Ireland Protocol was agreed by the UK and EU to avoid a hard border in Ireland.

It does that by keeping Northern Ireland in the EU’s single market for goods.

That has created a new trade border in the Irish Sea, causing some difficulties in moving goods from Great Britain to Northern Ireland.

The next step in the legal proceedings has been halted in an effort to quell tensions that have been rising between Brussels and London ever since the Northern Ireland protocol came into force at the start of the year.

Britain’s Brexit minister David Frost last week demanded a total overhaul of the Northern Ireland protocol despite the fact that he was the lead negotiator in charge of assembling it along with his EU counterparts.

He called for “significant” changes including a “standstill period” to continue current grace periods due to expire in September after the EU announced it would extend them beyond the original June deadline. He also called for a freeze on legal action by the Commission.

“With regards to a request for a standstill, the Commission will carefully assess the new proposals made by the UK, in accordance with the necessary consultation procedures, both internally, and with the European Parliament”, the Commission has said.

The EU has also reiterated its position that the Northern Ireland Protocol is not up for renegotiation. “While the EU will not renegotiate the Protocol, we stand ready to address all the issues arising in its practical implementation, in a spirit of good faith and cooperation.”

A government spokesperson said they had received a “constructive reply from the Commission”.

“We have received a constructive reply from the Commission in response to our request for a standstill on existing arrangements,” a UK government spokesperson said in a statement.

“We look forward to engaging in talks with the EU in the weeks ahead to progress the proposals in our command paper.”

“As we set out in the Command Paper last week, significant changes are needed to ensure the Protocol is sustainable for future,” the spokesperson added.

Grace periods on chilled meats and other items are due to expire again at the end of September so both sides have a small amount of time to work out deeply fundamental, and apparently insurmountable problems. Patience and trust are in short supply in Brussels.

“As we set out in the Command Paper last week, significant changes are needed to ensure the Protocol is sustainable for future.”

Earlier, the EU published its proposals for simplifying some aspects of the protocol, including a plan for ensuring the continued supply of medicines from Great Britain to Northern Ireland.

The proposals were previously announced in broad terms at the end of June, but the UK government said they do not go far enough.