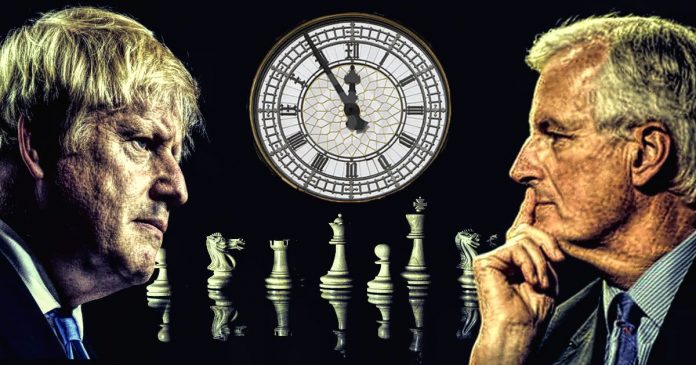 EU chief negotiator told ministers there is 1 day left to agree a new text with the UK ahead of the European Council summit.

European officials have said they need the hard details of a Brexit withdrawal deal within hours rather than days, ahead of an EU leaders’ summit. EU chief negotiator Michel Barnier said three issues needed resolution.

EU negotiator Michel Barnier on Tuesday said it was “high time” for Britain to “turn good intentions into a legal text,” ahead of the EU leaders summit later this week.

Barnier told a meeting of EU ministers from across the bloc that he needed a “clear answer” by Wednesday morning on any further concessions the UK might make.

Without them, the senior negotiator said, he would not be able to recommend the deal to European leaders ahead of their summit in Brussels on Friday.

Barmier said, after talks between the EU and UK negotiators, he still saw three scenarios as being possible: a deal being agreed imminently; a delay; or a breakdown of talks.

Britain is currently scheduled to leave the EU on October 31, with this week’s EU leaders’ meeting — the last scheduled summit before the Brexit deadline — long considered as being the last chance to approve a withdrawal agreement before that cutoff point.

Downing Street is playing down reports of an imminent Brexit deal with the EU, saying talks are still ongoing.

Boris Johnson is under pressure to get a fresh agreement by Thursday’s EU summit, but his spokesman said there was “more work still to do”.

EU chief negotiator Michel Barnier had said the two sides must agree the details by the end of Tuesday.

But the BBC’s Laura Kuenssberg said it was not clear whether a text could be signed off by then.

She said Mr Barnier was due to brief EU ambassadors at 1400 BST on Wednesday, after a possible European Commissioners meeting, meaning a new deal could get the “green light” from Brussels in the afternoon.

The Guardian is reporting that a draft treaty could be published on Wednesday morning, claiming the UK has made further concessions over the issue of customs and the Irish border.

The prime minister’s official spokesman said: “Talks remain constructive but there is more work still to do.”

Meanwhile, Irish Taoiseach Leo Varadkar said talks were “moving in the right direction” but gaps between the sides remained, and it was still unclear whether a deal would be ready in time for the Brussels summit.

His deputy, Tánaiste (deputy prime minister) Simon Coveney, said earlier that big steps” were needed on Tuesday “to build on progress that has been slow” because there would be no haggling over the details of the text once the summit began.

Irish prime minister says a deal is closer but there are ‘a few hurdles’ still to clear.

Boris Johnson is confident he will be able to get a Brexit deal through the House of Commons, Leo Varadkar said Tuesday.

“The prime minister said to me that if we could come to an agreement between the EU and the U.K., that he was confident that he would be able to get it through the House of Commons,” Varadkar told a press conference in Dublin.

Varadkar suggested the Commons could hold a non-binding indicative vote on the deal in the first instance over the weekend.

“We’re just going to have to see how the next few days develop. If we can get to an agreement on Thursday or Friday, and if the House of Commons is about to vote in an indicative vote in favor of that agreement on Saturday, it may not be necessary to even consider an extension, but it’s too early to make that assessment at this stage,” he said.

However, the Irish prime minister added that “there’s a few hurdles to go over before we hit that point yet.”

The British prime minister has a working majority of minus 45 in the Commons and would therefore require dozens of opposition MPs — as well as all his Conservatives — to vote for his deal in order for it to pass. Theresa May’s Brexit deal was defeated by 58 votes the third time it was put to MPs.

An extraordinary sitting of the Commons was planned for this Saturday but the U.K. government has said that events this week will determine whether it goes ahead. The sitting was intended to allow MPs to consider a Brexit deal, should one be agreed by the U.K. and EU leaders at the European Council summit later this week.

Giving his latest assessment on the Brexit talks, Varadkar said “the initial indications are that we are making progress, that the negotiations are moving in the right direction.” But he cautioned that “the gap was still quite wide” on the customs issue. He added he had had a “crazy day” and the situation may have changed since he was last briefed a few hours earlier.

Negotiations turned more positive following a meeting between the Irish prime minister and Johnson last week at a country estate in the northwest of England. Varadkar described the talks as “a broad meeting of minds, a landing zone of minds.”

“Actually turning that into a legal agreement is a different thing and that’s the kind of work that’s under way,” he said. “What I said last week was that I saw a pathway towards an agreement, but there’s a difference between a pathway and an agreement.”

A No. 10 Downing Street spokesman said “talks are ongoing” but there is still “a long way to go.” The spokesman declined to comment on the suggestion that the deal could be put forward for an indicative vote by MPs.

German businesses have already been suffering from the negative effects of Brexit, said Holger Bingmann, head of the foreign trade industry group BGA, pointing out losses to German exporters worth €3.5 billion this year.

Prospects of an agreement between the EU and the UK that would prevent a chaotic British exit from the bloc appear increasingly dim, as talks between the two sides reach an impasse and European leaders express doubts about striking a deal in time before the October 31 deadline.

As politicians seem unable to reach an acceptable accord, concerns mount in the business world that a disorderly British departure could wreak havoc on firms on both sides of the English Channel, causing job losses and damaging supply chain relationships

He warned that a hard Brexit would have “catastrophic consequences” for Germany’s exporters, pointing out that they would face “immense additional costs” in terms of customs and the bureaucracy of logistics, transportation, data protection and taxes.

Brexit has cast its shadow on UK-Germany trade for the past couple of years, Bingmann said. The expert noted that in the first half of this year alone, German exporters to the UK incurred losses worth over €3.5 billion ($3.85 billion) on account of Brexit-related negative effects.

The true extent of the damage to bilateral commerce is likely to be “much greater and will only become visible in a few months,” he said, as many firms have just replenished their stocks in the UK to prevent disruptions to the supply chain in the coming months.

Germany’s export-reliant manufacturers, meanwhile, are suffering not just from the UK’s planned departure from the EU. They’re also facing increased headwinds from a slowing global economy and growing business uncertainty over trade and tariff disagreements between the US and China.

Official statistics released on Monday showed that factory orders in Europe’s biggest economy slumped more than forecast in August. Industrial orders fell by 0.6% month-on-month, the Economy Ministry said, after a hefty 2.1% drop in July. Analysts had expected a 0.3% fall in August.

The figures come after the German economy shrank by 0.1% in the second quarter. Experts believe data will show an additional slowdown between July and September.

Leading economic institutes have recently slashed their growth forecasts for the economy for this year and next. But the labor market has so far appeared to be robust, with record-high employment in the country.

Even though calls for increased government spending to boost growth are growing louder, Chancellor Angela Merkel’s government has so far stuck to its balanced budget policy.

A trade deal at this time would end uncertainty and bring back some balance in western Europe.