Investigations have been launched into the deaths of hundreds of NHS and care workers who had Covid-19 to see if they were properly protected, it emerged today.

Ministers have asked medical examiners to review the deaths of all frontline health and social care staff who died while fighting the first wave of the epidemic in England and Wales.

The review, which was launched last month, will look to determine if the victims caught the infection as a result of their work and if they had access to personal protective equipment (PPE).

Hospitals have already been ordered to risk assess workers who may be more susceptible to the virus, such as those from a black and minority ethnic backgrounds or those with existing health conditions.

Many hospitals and care homes ran out of PPE at the height of the crisis and there were harrowing reports of staff having to make their own masks and use bin bags as aprons.

The Office for National Statistics estimates a total of 625 health and social care workers’ deaths across England and Wales were linked to coronavirus up to July 20 – one of the highest rates in the world.

The medical examiners, which were introduced in the NHS last year and are called in to independently review deaths, will state whether they ‘have reason to suspect the Covid-19 infection was acquired in employment,’ The Independent reported.

Employers including the NHS could face legal consequences if it emerges that deaths were caused by their negligence.

The review could spark several investigations by hospitals, health and safety watchdogs and coroners into the lack of protection healthcare workers received.

In cases where medical examiners suspect the workers caught the virus at their work, they will be referred to the Health and Safety Executive (HSE).

The watchdog will then probe further to see if the case was a direct result of failings by the hospital, NHS or Government.

Dr Rinesh Parmar, chair of the Doctors’ Association UK, told the Independent: ‘It’s a positive step that the Government is recognising these deaths need investigation, but we would ask that they take the next step with a full coroner’s investigation into all health worker deaths.

“Coroners are best placed to carry out independent investigations. They have the experience and they are not directly employed by hospital trusts so there is less of a chance of them being persuaded to make certain decisions or recommendations.”

One medical examiner working in England told The Independent: “It definitely is the right thing to do. There is a hope it could help develop ways to protect staff in the future.”

They added that determining whether someone caught the virus at work was not necessarily easy once the pandemic had become widespread, but added: “The intention is that no death will be left unscrutinised. There is an expectation medical examiners will have a low threshold to suspect the virus was occupationally acquired.”

Another medical examiner added: “This is exactly the kind of work we should be doing. Ensuring the right outcome for families and the deceased and helping the wider system to learn and potentially improve.”

It comes after an Office for National Statistics report last week found that 625 frontline health and social care workers were suspected to have died from Covid.

Men in the NHS had a much higher death rate from the virus compared to the general population, with a rate of 34 deaths per 100,000 people, compared with 22.

For women in healthcare it was less pronounced, with a rate of 13 per 100,000 compared with 11 in the general population.

A damning Commons report last month concluded that care homes were ‘thrown to the wolves’ during the pandemic and the Government’s actions were ‘at times negligent’.

The social care crisis was exacerbated further by a series of ‘reckless’ and ‘appalling’ policy errors, MPs said.

Advising hospitals to discharge thousands of patients into care homes without knowing if they had coronavirus was an example of this, they said.

In excoriating comments, the Commons public accounts committee report said: ‘This pandemic has shown the tragic impact of delaying much needed social care reform, and instead treating the sector as the NHS’s poor relation.’

It followed a report by the National Audit Office – the Government’s spending watchdog – which highlighted ministers’ PPE failings during the crisis.

The NAO found that plans to distribute personal protective equipment (PPE) were hampered because officials ignored warnings in 2019 to stockpile gowns and visors – and didn’t have enough of them when the need arose.

This resulted in less than half of the necessary equipment being available to healthcare workers on the frontlines of the crisis.

The report also found that ministers had ignored warnings to stockpile essential PPE in June 2019.

The New and Emerging Respiratory Virus Threats Advisory Group (Nervtag) – which advises the Government on pandemic planning – told Public Health England to stockpile tens of thousands of gowns and visors. 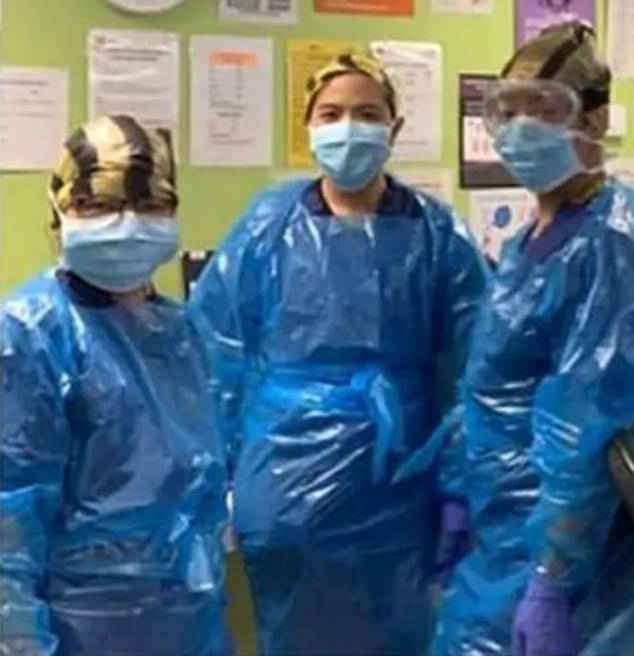 Many hospitals and care homes ran out of PPE at the height of the crisis and there were harrowing reports of staff having to make their own masks and use bin bags as aprons.. Pictured: Nurses wearing clinical waste bags on their heads at at Northwick Park Hospital in Harrow

The NAO said that PHE had only supplied a fifth of the gowns, a third of the eye protectors and half of the aprons that Nervtag had recommended.

Ms Hillier said frontline health workers had been ‘badly let down by the government’s failure to prepare properly’.

She added: ‘Shockingly, the government squandered the last opportunity to add to the central PPE stockpile, even after the NHS had gone to the highest level of alert.’

NHS England has since ordered all of its frontline staff to be Covid-19 risk-assessed, with factors like age, sex, ethnicity and BMI all taken into consideration.

Nurses and paramedics who are put in this category are either moved to areas where infection rates are low, while GPs are told to move to online consultations.

Matt Hancock also announced in April that families of medics who tragically lost their own lives to coronavirus after bravely trying to save others will receive a £60,000 life assurance payout.