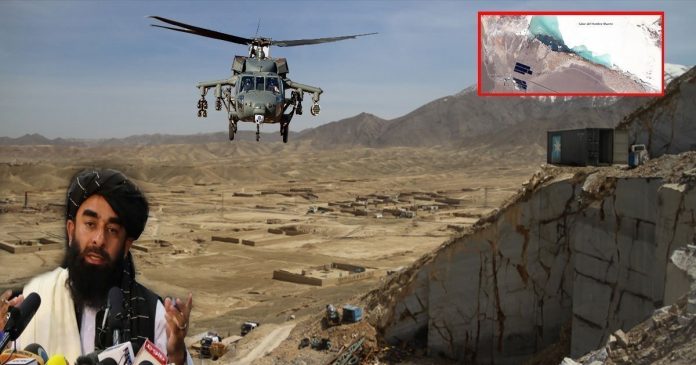 Manna from the War Gods

Taliban fighters not only took control of Kabul and the Afghan government on August 15. They also gained access to a gigantic deposit of minerals essential for renewable energies, possibly giving China an indisputable edge.

A Bloomberg New Energy Finance Limited report in 2020 highlighted China’s global dominance in the lithium-ion battery supply chain market, due to its grip on raw material mining and refining.

China incidentally also shares a small border with Afghanistan called the Wakhan Corridor – 210 km long. While the length of the border may appear insignificant, its location is crucial.

Afghanistan is believed to have large deposits of gold, iron, copper, zinc, lithium, and other rare earth metals, valued at over $1 trillion.

“Afghanistan may hold 60 million metric tons of copper, 2,2 billion tons of iron ore, 1,4 million tons of rare earth elements (REEs) such as lanthanum, cerium, neodymium, and veins of aluminium, gold, silver, zinc, mercury…” according to a 2020 report in The Diplomat.

But the Wakhan Corridor has been used by Islamic Uighur militants opposed to Chinese rule in Xinjiang. Chinese officials meeting with the newly installed Taliban are certainly aware of the risk that radical Islamists pose:

“We hope the Afghan Taliban will make a clean break with all terrorist organizations including ETIM (East Turkestan Islamic Movement) and resolutely and effectively combat them to remove obstacles, play a positive role and create enabling conditions for security, stability, development, and cooperation in the region,” said a high-ranking Chinese official.

Why is this important?

Global demand for lithium is projected to increase 40-fold by 2040, according to the International Energy Agency, along with rare earth elements, copper, cobalt, and other minerals also abundant in Afghanistan.

And these minerals happen to be concentrated in only a small number of pockets around the world.

The Bolivian Andes may contain 70 percent of the planet’s lithium and many analysts argue that extracting lithium from brine as in Bolivia is more environmentally friendly than extracting it from rock.

Interestingly, metallic lithium and its complex hydrides are used as high-energy additives to rocket propellants, thermonuclear weapons, or even as a solid fuel.

In 2010, the US Department of Defense called Afghanistan “Saudi Arabia of lithium” after American geologists then discovered that the country’s deposits amounted to at least a trillion dollars.

Lithium is an essential ingredient to produce long-lasting batteries used in electric cars in particular. The battery of a Tesla Model S, for example, has about 12 kilograms of lithium in it.

Ten years later, these metals have not yet been extracted. The Taliban is unlikely to sell the metal to Americans, and the United States views China, the world’s largest lithium producer, as its main rival.

And the US wants at least 40 percent of its cars to be electric by 2030. Thus the previous US-led government in Kabul had hoped that the promise of mineral wealth would entice President Trump into making a commitment to stay in the country.

“Afghanistan can be an appropriate place for US industry, and specifically the mining sector, to look at opportunities for investment,” Mohammad Humayon Qayoumi, the former chief adviser to Afghan President on infrastructure, human capital, and technology, once opined.

But Tom Benson, a PhD in the Department of Geological Sciences at Stanford University, has focused his research on a 16.3 million-year-old supervolcano on the Oregon-Nevada border that contains the largest lithium deposit in the United States.

A number of other active volcanoes may hold the same deposits and there is a particularly “exciting” one, called Bogoslof, in Alaska. That may be why the US has lost interest in Afghanistan.

“The Taliban are now sitting on a stockpile of one of the most strategic minerals in the world,” said Rob Schoonover, an ecology expert at the US think tank Center for Strategic Risks, in an interview with Quartz. “The question of whether they will be able to play this role will be important in the future.”

To defend their wealth the Taliban have been gifted Planes, guns, night-vision goggles: The Taliban’s new U.S.-made war chest.

Along with one of the most important minerals future Green technology the United states also gifted the Taliban, arguably the most effective guerilla armies in the world, modern military warfare equipment any western country would envy.

The Taliban has access to $85 billion worth of American military equipment, a Republican congressman has warned in a speech in Washington. Former US Navy reservist Jim Banks said that the military equipment left behind includes 75,000 vehicles, 200 airplanes and helicopters, and 600,000 small arms and light weapons.

The Taliban now has more black hawk helicopters than 85% of the world, the Congressman said. “If any of these weapons or this military equipment is used to harm, injure, or kill an American now or at any time in the future, the blood is on Joe Biden’s hands,” Banks added.

Andrew Small, a Chinese foreign policy expert at the German Marshall Fund of the United States, said the Taliban was likely to grant Beijing access to any U.S. weapons they may now have control over.

One of the U.S. officials said it was not likely China would gain much, because Beijing likely already has access to the weapons and equipment.

The situation, experts say, shows the United States needs a better way to monitor equipment it gives to allies. It could have done much more to ensure those supplies to Afghan forces were closely monitored and inventoried, said Justine Fleischner of UK-based Conflict Armament Research.

“But the time has passed for these efforts to have any impact in Afghanistan,” Fleischner said.