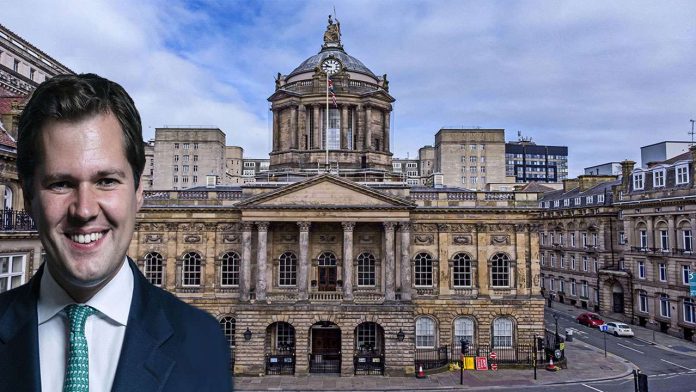 Local Government Secretary Robert Jenrick stopped short of ordering a full takeover of the council, with commissioners instead being sent to oversee specific functions within the planning, highways and regeneration directorate.

Robert Jenrick told the House of Commons a “serious breakdown of governance” and “multiple apparent failures” meant he had to take action.

The move came after the publication of a report by Max Caller, a local government inspector. The Inspectors were sent in by the local government secretary following allegations of fraud, bribery, corruption, misconduct in public office and witness intimidation at the council.

The authority has been under scrutiny since police began investigating building and development contracts.

The initial report was ordered after Joe Anderson, 63, Liverpool’s mayor, was arrested in December on suspicion of conspiracy to commit bribery and witness intimidation. He and Derek Hatton, 73, deputy leader of the council in the 1980s, were among 12 people detained.

Anderson is currently suspended from the Labour party on unpaid leave and no charges have been brought. The police had arrested 10 other people, including the city council’s head of regeneration Nick Kavanagh, in connection with Operation Aloft over the course of the previous 12 months.

Anderson has denied wrongdoing and has not been charged. He stood down as Liverpool Mayor.

Following the report, Jenrick said the “Best Value inspection”, commissioned in December, had found “multiple apparent failures” and a “deeply concerning picture of mismanagement” in some functions at the Labour-run authority.

In a statement to the House of Commons, he said:

“Given the gravity of the inspection findings, I must consider what would happen if the council fails to deliver the necessary changes at the necessary speed,” he said.

He said he was proposing to appoint commissioners to run some aspects at the city council for a minimum of three years.

He added that it was only the fifth time a “statutory intervention” had happened, as the move was regarded as a “last resort”.

“I want to underline the report is not a verdict on all the staff working at Liverpool City Council – in fact, [it] commends the hard work and dedication of many,” Mr Jenrick said.

He told the Commons: ‘I am also proposing that the council will, under the oversight of the commissioners, prepare and implement an improvement plan.’

Local elections, including a vote to elect a successor to Mr Anderson, are due to take place in May.

The Communities Secretary continued: ‘As a whole, the report is unequivocal – that Liverpool City Council has failed in numerous respects to comply with its best value duty.

‘It concludes that the council consistently failed to meet its statutory and managerial responsibilities and that the pervasive culture appeared to be rule avoidance.

‘It further concludes that changes need to be radical, delivered at pace, and there was no confidence that the council itself would be able to implement these to any sensible timescale.

Robert Jenrick is hardly a shining light of virtue.

As an aside, it’s fair to mention the Westferry planning scandal: Housing secretary Robert Jenrick admitted his bias towards Tory donor was unlawful. Link

The minister approved a housing scheme 12 days before the developer gave £12,000 to the Conservative Party.

Labour said the timing raises “cash for favours” suspicions – but Mr Jenrick insists he did nothing wrong.

However. Jenrick has since had to quash his own approval, conceding the decision was unlawful. Link

Responding to a question from Garston and Halewood MP Maria Eagle, Robert Jenrick confirms that the work of the commissioners will be reviewed every six months.

He says that if progress is made quickly enough, the commissioners could leave the council sooner than that three year term.

‘There may also be further issues of which we are not yet aware, and the report is careful not to speak to matters that might compromise the ongoing police investigation.’

The Local Government Act 1999 gives the Secretary of State powers to appoint a person to inspect an authority and to intervene, taking over its functions, either directly or through commissioners, where there is evidence that it is failing in its compliance with what is described as “best value” duties.

Since 2010, the Secretary of State has previously intervened in four local authorities – Doncaster, Tower Hamlets, Rotherham and Northamptonshire.

Guidance from the MHCLG states each intervention is different and options include other approaches, such as the issuing of directions to provide for specific actions, rather than the appointment of commissioners.

Shadow communities secretary Steve Reed said: ‘Labour – both here and our leadership at the city council – accept this report in full.

Responding in parliament to the statement this afternoon, the Shadow Communities and Local Government Secretary told the Commons: “Labour both here and our leadership at the city council accept this report in full.

‘We support the Secretary of State’s intention to appoint commissioners, not to run the council, but to advise and support elected representatives in strengthening the council’s systems. This is a measured and sensible approach.

‘I want to reassure people in Liverpool that this does not mean Government ministers are coming in to run their city. We would never support a Tory takeover.

“We support his intention to appoint commissioners, not at this stage to run the council as he says, but to advise and support elected representatives in strengthening the council’s systems. This is a measured and appropriate response.”

He stressed to those watching that the proposals were not “as some would put it a Tory takeover”, and that government commissioners would “intervene directly only if the council’s elected leaders fail to implement their own improvement plan”.

“The Labour Party intends to appoint a senior figure to lead a review and reassure the people of Liverpool that the Labour Party takes these concerns seriously and will take action against anyone in our ranks who is involved in wrongdoing,” he said.

Paula Barker MP, the Labour representative in the Liverpool Wavertree seat, said that she “does not doubt the seriousness of the issues” raised and described the findings that public resources had been put at risk as “deeply worrying”.

“Resources are needed for investment on vital services on which my constituents depend, and that is even more so at a time when funding has been cut year on year,” she said. She asked Jenrick to confirm that commissioners will be independent.

“Commissioners will be appointed by me and will work to me,” Jenrick said. “But their task is to support the city and its elected leadership to ensure that a good and credible improvement plan is brought forward as quickly as possible.”

“We all appreciate the seriousness of the situation,” Dan Carden declared. The Liverpool Walton Labour MP asked how local people’s voices and democratic rights would be respected under the plan to improve the council’s functions.

“The people of Liverpool must be part of that process and this week I’ve been contacted by local people concerned that sending commissioners into Liverpool amounts to a takeover by Whitehall,” he declaired.

Jenrick told the MP that the elections in May will go ahead. He said that the commissioners would “stand behind” the elected mayor and councillors – “not to tell them what to do but to guide them and support them”.

“We have given them the authority to act should they need to, given the seriousness of some of the allegations, but it is not our hope or expectation that those powers will be exercised,” Robert Jenrick added.

Labour MP for Liverpool West Derby Ian Byrne asked the minister to reassure local residents that council-led work on the Covid pandemic response and vital services on which they rely will continue and “be both resourced and protected”.