THERE is a particular poignancy in seeing politicians who ignored up to two million people marching against mass slaughter in Iraq now insisting that a smaller number on London’s streets demanding another EU referendum merits consideration.

“This isn’t the Brexit we voted for,” many declare. Of course it isn’t, because yesterday’s mobilisation was organised by those who opted for Remain. They didn’t want any form of Brexit.

Their patronising demand for a “People’s” Vote, with its implication that extraterrestrials or farm animals voted to leave first time round, oozes New Labour marketing style.

Whereas obstacles were placed in the way of the Stop the War Coalition in 2003, from media misrepresentation or censorship to Blair government attempts to prevent marchers gathering in Hyde Park for fear of “damaging the grass,” the neoliberal media, including the BBC, has been wholeheartedly behind the People’s Vote project.

That’s on top of sizeable donations — up to £1 million, from Superdry co-founder Julian Dunkerton, currency speculator George Soros and others.

Many marching did so for utterly laudable sentiments, viewing the EU as a civilised, humanitarian alternative to the reality of a Tory government riddled with racism, xenophobia and contempt for the working class.

Unfortunately this is a false dichotomy — spot on about the Tories but irredeemably idealistic about the EU.

The Schengen agreement, allowing internal EU free movement, is mirrored by a Fortress Europe attitude to the rest of the world that bankrolls Turkey and Libya to act as EU border guards to prevent people from war zones and economic desperation from reaching the EU to seek asylum.

On economic policy, the EU Stability and Growth Pact lays down a capitalist austerity regime for the entire bloc, with severe restrictions on budget deficits and public borrowing that have ravaged many peripheral economies — Greece most severely.

EU rules have seen wages and pensions slashed, unemployment, privatisation and poverty soar and the Greek public sector parcelled up as a ransom guarantee against future payment default.

Such contempt for national democracy is ingrained within EU structures, with no direct voter accountability for the key Council of Ministers or the European Commission, which is guided in its deliberations for proposed legislation by the European Roundtable of Industrialists and an army of transnational corporate lobbyists.

The so-called European Parliament has no right or function to propose legislation. It is little more than an expensive debating chamber and a pseudo-democratic fig leaf for corporate governance.

The Tory Party has always prioritised City of London interests, especially the finance sector, which is why David Cameron, George Osborne and Theresa May led the Remain charge in the 2016 referendum.

May’s government still has this priority, so we can anticipate Tory negotiations with the EU as most likely resulting in a Brexit in name only.

Over two-thirds of Labour MPs represent constituencies that voted to leave the EU, which should serve as a caution to EU cheerleaders in the party leadership not to leap on board the People’s Vote bandwagon.

As Jeremy Corbyn has said consistently, the people’s vote in 2016 was to leave and that must be respected.

Alastair Campbell one of the Blairite protagonist thinks we have all forgot. 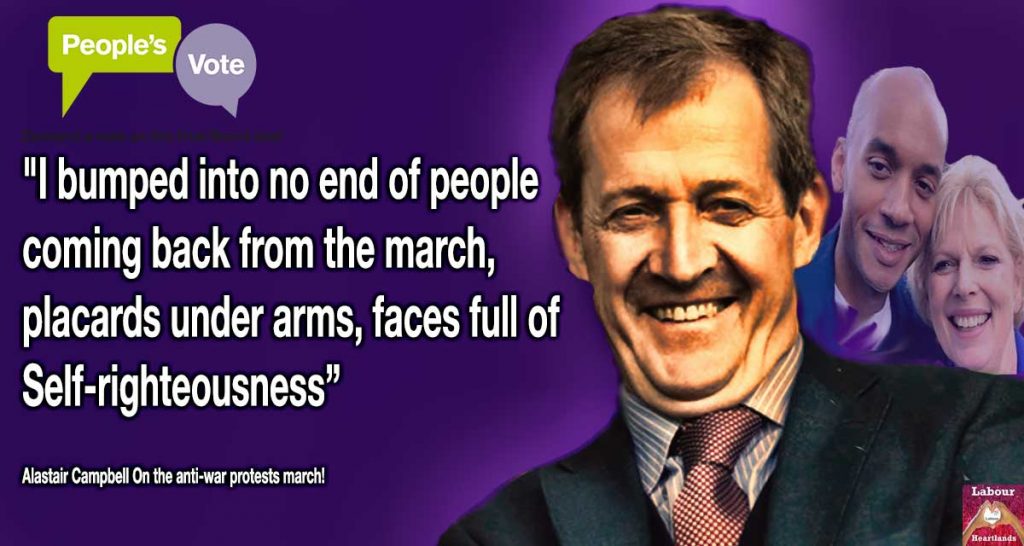 I bumped into no end of people coming back from the march,placards under arms, faces full of Self-righteousness

Asked why he and Blair ignored the biggest march in UK history he replied:

“We didn’t ignore [the protest],” he said. “Tony Blair was the prime minister, wanting to get reelected, and he looked out of his window and saw there was an awful lot of people against it.” He went on: “But, ultimately, this is why I am against referendums in general. Governments and prime ministers are elected to take big decisions and take the country forward.

Hypocrisy!
No to a #Peoplesvote yes to #GeneralElectionNow