Remainer amnesia and the rejection of reality

For decades, no issue has come close to Brexit in terms of its ability to inflame political passions. European Council President, Donald Tusk’s comments last February about a ‘special place in hell’ for those who promoted Brexit is indicative of the low opinion of many Remainers for Brexiteers. The situation in universities is similar. The assumption is that you will be pro remain and everyone talks to each other accordingly.

I am a relatively young, leftist academic, an immigrant to the UK and married to a Greek. I am also strongly critical of the EU. ‘Brexiteer’ has become synonymous with thick, xenophobic and even ‘gammon’. But I am pro-Brexit because I am pro-worker, pro- democracy, and pro-migration, none of which can be said of the EU.

My criticisms of the EU stem from my long relationship with Greece, where I have lived on and off for nearly fifteen years. In the first years of the crisis, I watched as ‘troika’ (European Commission, European Central Bank, and the IMF) imposed austerity destroyed people’s lives and extinguished the small flame of hope that things might finally work in favour of ordinary people.

I watched in horror as a bailout of French and German banks on the backs of Europe’s poorest was portrayed as a ‘rescue effort’ for the weakest members of the ‘European family’. In 2012, I interviewed working class people who kept going to their jobs unpaid, sometimes for months, at a time when the media was portraying them as weak and lazy and a threat to the grand European project.

Yet there is a curious historical amnesia and wilful blindness to the ongoing treatment of Greece by the EU. The EU’s portrayal as a bastion for workers’ rights is belied by the way it forced Greece’s then leftist government to implement a number of anti-union reforms. This is just one act in a ten-year melodrama that’s seen the slashing of wages and pensions to below subsistence levels.

Suffering for the cause of self-determination is better than suffering at the hands of a foreign master. But that option was never on the table.

But Donald Tusk’s condemnation of Brexiteers was interesting for other reasons. His ire was particularly directed at ‘those who promoted Brexit without even a sketch of a plan of how to carry it out safely’. This emphasis on ‘safety’ makes clear the central issue.

The pro-Remain political class fails to realise that safety is not the widespread value they assume. Indeed, risk-taking can represent a positive and even emancipatory act. SYRIZA was similarly mistaken in the lead up to the 2015 ‘bailout’ referendum by grossly over-estimating the risk-aversion of Greeks. Speaking to people then, many were willing to take the risk of ‘Grexit’ even if it meant suffering. Suffering for the cause of self-determination is better than suffering at the hands of a foreign master. But that option was never on the table.

For the pro-remain political class, safety is the ultimate goal of the technocratic dream. Big questions like ‘who gets what’ and how things should be organised are too important to be left to electorates. EU technocratic outsourcing makes democracy a cumbersome sideshow to making numbers add up on computer screens. From this perspective, referenda are, as Tusk told David Cameron back in 2016, ‘dangerous’ and ‘stupid’.

This outlook is now everywhere. We seem to have lost faith in the merits of public debate, seeing instead the only answers to social problems in social engineering. The EU offers a clear path for advocacy groups and policymakers to evade democratic mandates and lock in policies without widespread support. It is the perfect institution for a political and knowledge class that sees the masses not as minds to be swayed but as problems to be administered to. Having no hope of convincing the electorate of policies they claim the EU represents—for instance an openness to migration—hopes are vainly pinned to an undemocratic institution which can impose policies from above.

However, the lack of debate regarding how a post-Brexit UK might look hints that many Remainers do not actually support the policies they claim to. For instance, while the end of free movement for Brits and Europeans is widely derided, little has been said of the active involvement of the EU in stemming the tide, through force if necessary, of ‘undesirables’ from beyond the EU. There is reluctance to confront the question of whose ‘free movement’ we are willing to defend whose we are willing to forget.

It is because I believe free movement is so important that I believe it cannot be placed outside democratic debate. Impositions from on high only turn people further against what ought to be a fundamental human freedom. It is a freedom that must be fought for and won. Giving up on democratic resolutions prevents the ambivalence’s on all sides from coming out. It permits the unchallenged and continued scapegoating of migrants in exchange for a moral high ground that is not morally deserved.

As a leftist and an immigrant, myself, I simply could not support the EU in good faith. It is not good for workers and downright hostile to democracy and those who come from beyond the walls of the European fortress.

“I accept that Brexit is a risk. However, for the first time in a long time it is a risk that we are freely willing to take.”

Democracy is the most controversial idea in the world. It is really self-government. If you can establish the case for democracy, then you’ve got people listening to you all the time,

Being anti-EU  does equals narrow nationalism.

“I’m not a nationalist. I’ve not appeared on platforms with any right-wing people against Europe, I don’t give a damn about keeping the Queen’s head on postage stamps,”

But, at the same time. I supported the Indian National Congress, the ANC in South Africa and all the national liberation movements, which were national, because you have to differentiate between nationalism, which hates foreigners, and the right of self-government, which is a democratic argument. -Tony Benn 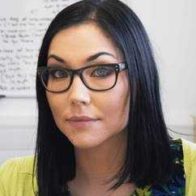 Ashley Frawley
Originally from Canada and a member of Nipissing First Nation, Ashley Frawley is senior lecturer in sociology and social policy at Swansea University in Wales. Ashley lectures in the sociology of health, mental health and illness, social problems, social movements, and in the economics of social policy. Her research explores the rising importance attributed emotions and behaviour in an era of ‘no alternative’ to capitalism. Author of 'The Semiotics of Happiness' and Significant Emotions: Rhetoric and Social Problems in a Vulnerable Age.