Sinn Fein president Mary Lou McDonald has announced that the party has agreed to back a deal to restore powersharing at Stormont – a move that confirms the return of devolved government in Northern Ireland after a three-year absence.

We believe that the changes that have been achieved in the negotiations in the last year build on what was agreed in February 2018.

Ms McDonald adds: “The first action of incoming executive must be to deliver pay parity to health workers. There are also a range of proposals to support our teachers.

But we now have a basis to restore powersharing, and we are up for that

Ms McDonald said there has been progress on abortion rights for women and same-sex marriage for people in Northern Ireland.

“I want to reject in the strongest possible terms the British governments commitments to the DUP on flags and other issues. These are not part of this agreement. In our view they fly in the face of the Good Friday Agreement and they represent bad faith.

It is disappointing that the Irish government acquiesced to these measures.
“But we now have a basis to restore powersharing, and we are up for that.”

Mrs McDonald said: “I believe that powersharing can work. It requires everyone to step up. Sinn Fein’s commitment is to do all in our power to make this happen.

We need to have an inclusive executive. At these historic times we will also continue to work for Irish reunification and we want to ensure that the criteria for the triggering of an Irish unity poll are set out and that planning for Irish Unity is stepped up.

Including the convening of the national forum to discuss and plan for the future.
“Three years ago, Martin McGuinness set down a challenge to all of us to get it right and deliver for all, for every single citizen. And now we need to go to work.”

The Sinn Fein president adds: “Lets get back to work. Getting back to work for the political parties means sitting at the Executive table, sharing the decisions, sharing the load and delivering for the rest of us for our people.”

The history in brief and What went wrong?

In Northern Ireland, the government’s power must be shared between two different political parties. This is a result of something called the Good Friday Agreement, which came about to bring peace to Northern Ireland.

The First Minister and Deputy First Minister lead the government – one representing each of the two parties in power. Although they have different job titles, they basically have the same powers and must work together. Together, they are referred to as the Northern Ireland Executive.

But nearly three years ago there was a power-sharing argument between the two governing parties (the DUP – or Democratic Unionist Party – and Sinn Fein), which led to the government at Stormont being dissolved.

The argument was about whether the First Minister Arlene Foster – the leader of the DUP – ran things badly or not.

The Deputy First Minister Martin McGuinness from Sinn Fein said she did and he left his job because of this disagreement, which reached a peak with an argument about a green energy scheme. 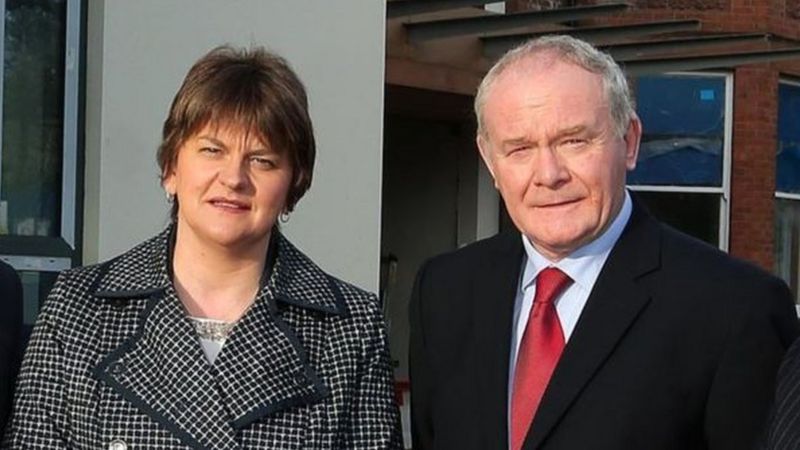 Arlene Foster and Martin McGuinness, before it all went wrong

He had been deputy first minister since the DUP and Sinn Fein made a historic agreement to share power back in 2007.

When Mr McGuinness resigned, Sinn Fein refused to appoint anyone else to his job to replace him, which meant that new elections had to take place.

Under Northern Ireland’s power-sharing agreement, Mrs Foster lost her role as first minister as a result of what happened. She said she was “disappointed” by his move.