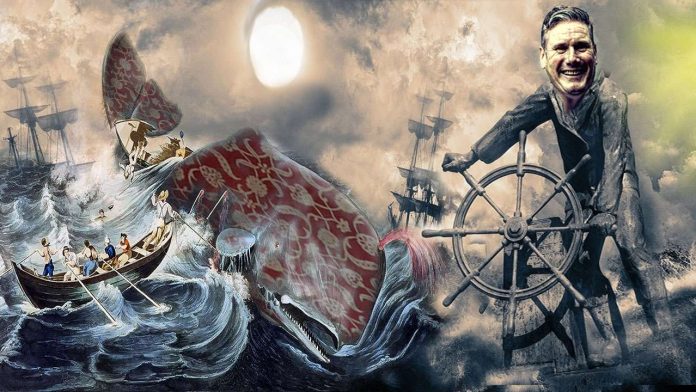 No one needs the polls to tell them how badly Labour are doing.

After eleven years of Tory rule Labour should be preparing itself for power. The Party should have a coherent articulated vision of what a Labour-run Britain would look like, for a democratic socialist Party that is not such a tall order, it usually starts with an idea of equality while giving everyone access to the tools in life to help them succeed no matter their circumstances.

Followed by an industrial strategy of investment and jobs never mind the popular support for nationalisation of Rail, mail and utilities or real investment into the NHS while creating partnerships and public ownership of the pharmaceutical section and suppliers of medical and PPE equipment, helping to secure the good health of all UK citizens going forward.

Unfortunately, no matter which version or vision of a Labour-led future Starmer is doing a terrible job.

It’s either the result of his incompetence, lack of political experience, along with an absence of vision, no policies and the sheer fact that people just don’t like him, all of which combined are part and parcel of Labour crashing on the rocks; or he is doing an excellent job and his mission to crash the Labour Party on the rocks is working a treat.

It’s not as if the Tories have not given Starmer opportunity after opportunity to highlight their incompetence and mismanagement of every aspect of government.

There are so many incidents and issues that Sir Keir Starmer could bring to the front, to emphasise to the public the nature of this Kleptocracy of a Tory government and Johnson’s regime.

There is a year of bad decisions that have resulted in over a hundred thousand covid deaths, extended lockdowns that if handled differently could well have been avoided, an oven-ready Brexit deal that tasted like a poor microwaved snack-pot but it seems the Barrister that Starmer actually is, wants to pursue a legal attack on Boris Johnson and the Tories.

There are so many other things Starmer could and should use to bring the Tories down, who funded the decorating of Johnson’s fault while adding weight to the pile is insignificant when we look at the bigger picture. The loss of lives, the cronyism, the fact that thousands have lost their jobs, the reality of poverty Britain and escalating use of food banks.

Any other leader would be 20 points ahead

Obsessing over wallpaper will not bring the Tories down, offering an alternative just might.

While the public are aware of the scandal surrounding Boris Johnson, they aren’t as yet moved in terms of their voting intention

The monthly survey – carried out between 16-22 April, before the latest allegations made by Johnson’s former key adviser Dominic Cummings were made public – put the Tories on 40%, three points clear of Labour who are on 37%, down from 38%, the Liberal Democrats on 8% (up from 6%), and the Greens unchanged at 5%.

A second poll released on Monday found the Conservatives had a 10-point lead over Labour, with both parties unchanged compared to the previous week. The survey of 2,000 voters by the consultancy firm Redfield & Wilton Strategies found that 44% of people said they would vote Tory if there was an imminent general election, while 34% would vote Labour.

This week, we recorded figures of 44% Conservative and 33% for Labour.

It’s hard to look at those numbers and conclude anything but an apparently confusing and contradictory state of affairs: the public very much know what’s going on, and know that a series of scandals currently surround the Prime Minister, but it has changed very few minds on the man himself or his party.

Unfortunately for the UK, the opposition leader is just paying lip service in his attacks on the Tories. His main obsession seems to be an all-out attack on the Left while at the same time making the Labour Party unelectable.

Starmer’s inability to articulate a competent alternative to the Tories lets down all those good Labour members and more so the councillors fighting to win their seats in the local elections.

Labour made the election about the NHS and nurses pay, for the locals that just doesn’t hold water.

The sleaze allegations have done little to nudge the numbers in Labour’s favour. Labour’s campaign has been incoherent, lacklustre and dishonest, no matter how many Labour councillors win seats, none of them has the gift to give nurses a pay rise or fund the NHS, honesty would have involved a promise to give local authority care workers a pay rise but that would actually mean doing something.

Labour had the opportunity to make real gains this May but I predict they are on a hiding to nothing.

The only thing that could have saved Labour was a clear articulated vision of the future with life-changing alternative policies, not a choice of two evils

If Starmer and his team actually stopped to listen to people they would have understood the same things that concerned them before the pandemic still concerned them today. Some of those things a strong Labour councils could have made a defence, such as food banks, housing, organising communities, better placing them to support each other through the current and future environments and most of all hitting back on the ongoing austerity cuts, luckily the Trade Unionist and Socialist Coalition (TUSC) are fielding over 330 candidates, all on a mandate of fighting austerity and council cuts.

The aftermath of next week’s elections in England, Scotland and Wales will leave Labour asking a lot of hard questions, however, we all know the answer from Starmer when he fails to make ground will be ‘its the aftermath of the Corbyn tenure, we are still picking up the pieces from the 2019 general election result’.

This will be the golden opportunity for the ship’s crew to ditch the Captain, the Captain hell-bent on seeing the good ship Labour crash into the rocks.

When Starmer’s Labour walked through the division lobbies alongside the Tories in support of Johnson’s Brexit trade deal at the end of 2020, the Remainers dropped support for him now only 48% of Remain voters would choose Labour, down from 58% in December.

Starmer rode a wave of Remain populism but since his takeover of the Leadership, he has cast aside the Remainers, their job of undermining Corbyn and propelling him to the leadership done.

A truth Starmer has shadow Brexit secretary has never faced was the collapse of the Labour vote was not down to socialist policies or Jeremy Corbyn but a direct result of his own vote losing second referendum policy, a policy that witnessed England losing 52 leave voting seats out of the total 54 lost.

Unfortunately for Labour, Starmer’s efforts at making overtures to the Leave-voting Labour Heartlands that old Red wall has fallen on deaf ears and will continue to do so.

Within the Labour Heartlands Starmer was directly blamed for the vote losing second referendum in 2019.

This remains true today and is why ‘Red Wall’ areas will not fall readily back to Labour hands in council and mayoral elections next week.

At the end of April, polls show Labour dropping like a stone people sticking with Labour has dropped from 88% to 81%.

This seven point drop is a significant number – it could represent over 800,000 people who voted Labour in 2019 deserting the party.

Next weeks results will also belong to Starmer the question left standing is will Labour allow this political grifter to crash its ship into the rocks either by design or incompetence.