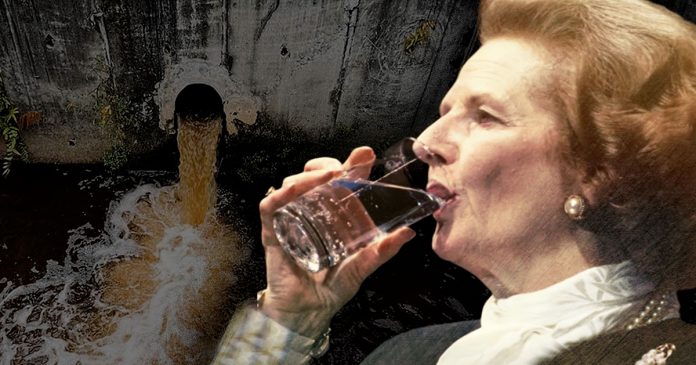 When Margaret Thatcher sold off the water industry in 1989, she gave away not only a natural resource but a natural monopoly. There is no competition, there is no ‘invisible market hand’ pushing prices down, this is monopoly capitalism at its worst.

The privatisation of water hasn’t only been a fountain of wealth for the Oligarchy. They have drunkenly supped without care or responsibility, neglecting proper reinvestment. Their only objective, their only target, is to quench the parched throats of the ever-thirsting shareholders

Thatcher privatised our water with a story about lower bills and a shareholding democracy. This story was wrong about efficiency. Privatisation has given us waste, not efficiency. It was wrong about power – we have no ‘share-owning democracy’. And it gave no sense of the collective commons that is ever more important as we reach a point of an environmental crisis.

The monopoly of the private water companies makes a nonsense of the idea of ‘consumer choice’. We are citizens, not consumers, when it comes to public services like water.

People are not commodities, nature is not a commodity.

We have reached the point where the Water companies have allowed the crumbling Victorian system to fall into such disrepair it has become the cog of an environmental debacle, a failure of a mechanism that was created for clean water, now poisoning our rivers and sea.

Across the country, we are witnessing the effects of this poor investment in infrastructure, a lack of expenditure into a system where the executive’s only excuse for not doing so is greed.

Thames Water alone, which is connected to almost four million properties and serves the majority of London, lost 232 billion litres of water in 2020/21 – the equivalent of almost 93,000 Olympic swimming pools. Each day the company was losing 635 million litres of water due to leaks, ironically Thames water is another water company that has imposed a hose pipe ban on its customers.

This is happening while London is running out of water to drink because of rising demand, decreasing rainfall and insufficient infrastructure in which to store groundwater. Too little investment is being pumped back into building new sewers or reservoirs.

As If the billions of litres of leaking water are not bad enough. This week we have seen the UK’s public health body calling for an upgrade to the sewage system as tourist spots are closed after pollution warnings were put in place on 40 beaches across England and Wales. This comes after expected flash flooding overwhelmed the crumbling Victorian sewage systems.

The UK’s public health body warned of the risk of illness to swimmers after water companies had dumped sewage and wastewater into the sea, it came as a matter of course statement as if this was a natural event created due to adverse weather conditions and not the poor systems water companies refuse to upgrade.

Jim McManus, president of the UK’s Association of Directors of Public Health, on BBC Radio Four’s Today programme stated. “It harms the economy, it harms ecosystems, it harms health,” “We need a sewage system fit for the 21st century that stops discharging sewage wherever possible.”

McManus warned of abdomen, chest, ear, eye infections, e-coli, salmonella and even hepatitis A being contracted by way of contact with soiled water. “There are health impacts being seen and sometimes you see GPs reporting on those every year,” he mentioned, including that family chemical compounds additionally discover their method into waste water.

“We made massive strides in life expectancy because of sewage, because of food safety . . . and here we are talking about the harms from sewage 175 years after my first predecessor tried to stop that harm,” he added.

The blowback will add to stress on the water monopolies and their regulators in England and Wales this summer season, which have been closely criticised for awarding profitable pay packages and dividends to chief executives and traders while asserting hosepipe bans for households and presiding over leakage and environmental failures.

Throughout England, water companies have failed to cope with the hot weather and intermittent downpours.

Earlier this week, Southern Water was attacked for telling swimmers to “use your judgment” on whether or not to swim in water affected by a launch of sewage.

“We’re not saying to customers: ‘Don’t swim or don’t go in at all’. We’re saying: ‘There has been a release, this is how long that release has been. It rained, so it’s 95 per cent rainwater, you then need to use your judgment on whether you feel it’s safe to go swimming or not’.”

When reporting on the 40 beaches affected by raw sarge releases ‘The Environment Agency’ seem extremely blasé publishing the pollution alerts, saying the rainfall and flooding of the past few days have affected water quality.

What they neglected to say is the archaic system that has seen little to no reinvestment since privatisation could not cope with a natural weather event.

Water companies have been accused of failing to detect sewage discharges at popular seaside resorts with monitors ‘not working 90% of the time’.
Water firms insist they are committed to tackling the issue
Campaigner Feargal Sharkey spoke to #BBCBreakfasthttps://t.co/WUYx6XvjdU pic.twitter.com/yZWchvm9Nb

This comes about because there is no incentive to invest in better more modern infrastructures as the law allows water companies to continue to dump raw sewage into the sea and rivers.

We are told that when this happens, it is legal for Water companies to release sewage into rivers and seas. Current regulations allow water companies to discharge a certain amount of wastewater and untreated sewage into the sea via combined sewage overflows, which hold effluent along with excess rainwater. They claim it prevents sewage works from becoming overwhelmed during periods of heavy rain.

However, apart from the very obvious, like the fact, that Water companies are dumping millions of tons of Human excrement into our water systems. It is not that the systems cannot cope, they were never built to cope with today’s population or environment, they are in some cases nearly 200 years old.

Southern argued the sewage dumping had not been deliberate, and after the case said the company was committed to transformation, transparency and cultural change.

According to an analysis of data taken by the Labour Party from the Environment Agency, water companies spent 9,427,355 hours discharging sewage between 2016 and 2021 into the sea and rivers across the UK. That figure is an increase of 2,553 per cent over five years.

The Labour Party, which obtained the data under Freedom of Information laws, has warned that the full scale of pollution could be much worse.

The environmental campaign group Surfers Against Sewage (SAS) has collected data that suggests storm sewage discharges have taken place in the waters of beaches in Cornwall, Cumbria, Devon, Essex, Lancashire, Lincolnshire, Northumberland and Sussex, and warned that bathers could be put at risk.

The most concentrated areas were across the south coast. These are areas that rely heavily on the Tourist trade.

None of this has stopped the companies from making billions. In profit and while customers may show their outrage the monopoly system does not allow them to move suppliers, your location sets your supplier, this monopoly gives the water company unparalleled power over your life.

England’s water system hosts the last of the privatised monopolies. You can shop around for gas and electricity, telephone and broadband. Not water.

Environmental groups argue that climate change means water companies must become part of a coordinated effort to protect water supplies and that this cannot be done while they remain private.

Water is a human right, and privatisation has failed. For over 30 years, the private water companies in England* have ripped us off, polluted our rivers with raw sewage, dodged taxes and let our water drain away through leaky pipes – all while extracting BILLIONS in profit and paying their CEOs MILLIONS!