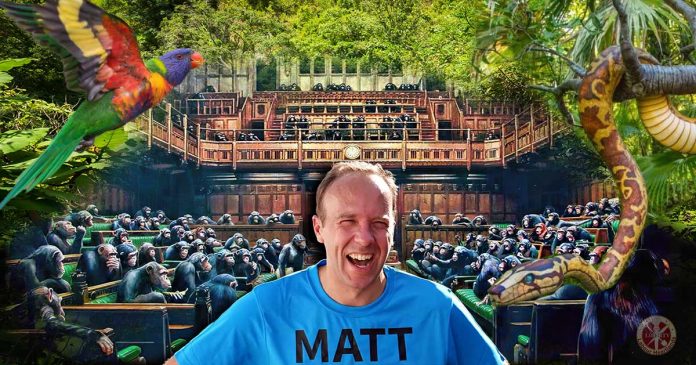 While millions struggle to make ends meet during the cost of living crisis, MPs raked in nearly £10 million from second jobs in a year.

The former health secretary is tipped to receive £400,000 for ‘I’m A Celebrity’. But other MPs are also on the make…

MPs are using their position as a springboard to promote themselves not their causes and definitely not their constituents or parties.

Open Democracy’s recent revelations have shown MPs never for one minute took it seriously when we expressed our demands the do the job they’re paid to do in representing the people rather than using that job as a revolving door or a launchpad for celebritism.

Seth Thévoz writes moonlighting MPs including ‘I’m a Celeb’ finalist Matt Hancock have pocketed £9.6m by working second jobs in just over a year, new analysis by openDemocracy has found.

It comes as former health secretary Hancock faces criticism over the reported £400,000 fee he is due for appearing on the reality TV show, in which he finished third last night.

That’s because almost all (21 out of 24) of the highest earners in the Commons were Tories, even though they made up only three-fifths of the total number of MPs with second jobs.

Eight out of 14 Lib Dem MPs, and three out of eight DUP MPs, also declared income from second jobs.

The findings also show that the amount MPs have raked in from outside earnings is skyrocketing from a year ago putting the figure at £6m over a longer period of 18 months, the equivalent of less than half the new figure.

The highest earners are barrister Geoffrey Cox, the MP for Torridge and West Devon, whose in-demand legal practice has brought him more than £1.4m; and former prime minister Theresa May, who has netted £1.3m, mainly in speaking fees.

Boris Johnson shows every sign of wanting to follow in May’s footsteps. Last month, he was paid £276,130 plus expenses by the Council of Insurance Agents and Brokers in the US to address its conference in Colorado, just five weeks after he left office. That is despite a blanket ban on ex-ministers taking any outside jobs within three months of leaving office.

Matt Hancock has not yet reported his fee for ‘I’m a Celebrity…Get Me Out of Here!’. But if, as widely reported, it is £400,000, it would make Hancock the fourth highest-earning MP for second jobs, and the highest-earning non-Tory (he lost the whip over his appearance on the show), after Cox, May and Conservative MP John Hayes.

Hancock, who has said he will donate part of the fee to charity, had already amassed £24,000 over 13 months for a range of articles, media fees from TV company Cloud 9 Productions, and after-dinner speaking bureau Chartwell Speakers.

Figures on MPs’ second jobs are heavily skewed by a small number of MPs who have exceptionally high earnings.

Those 24 MPs earn more from their second jobs than from their MPs’ salaries, and together earned £6.9m – 71% of all outside earnings by MPs during the time period we analysed.

Not all second jobs are lucrative, and some account for very little time.

It is common for MPs of all parties to fill out surveys from pollsters, taking 15 minutes to an hour, for between £75 and £100. Some – though not all – of these MPs donate the fees to charity.

Other MPs receive modest royalty cheques for books already written, while nurses and doctors who are elected to Parliament often continue to practise part-time as required by their professional licences.

MPs can also undertake time-consuming work, but often they are not the highest earners. Eight MPs declared more than 1,000 hours of outside work a year – the equivalent of 125 full working days, or just under six months – while another 25 declared more than 500 hours. Many of these work as paid councillors, or as elected members of other bodies, such as the Scottish Parliament, often representing the same seat at different levels.

For instance, Ben Bradley, Tory MP for Mansfield, reports working a 30-hour week as leader of Nottinghamshire County Council, but his £35,211 council salary is less than half his wage as an MP.

Because of the way the parliamentary register works, our figures do not include MPs who are buy-to-let landlords. More than one in four MPs – 182 in total – have substantial land and property assets that they do not live in. These all have either a value of more than £100,000 or generate rental income of at least £10,000 a year.

More than one in six MPs – 116 – also have substantial shareholdings. Again, any income and windfall from these shares is not included in the ‘second jobs’ figure. MPs are only required to register shares if they own more than 15% of the capital in a company, so it is likely that more MPs than this trade in shares without having to declare it.

Nothing to choose between them, a right pair of Barristers: Starmer caught out in second job lies