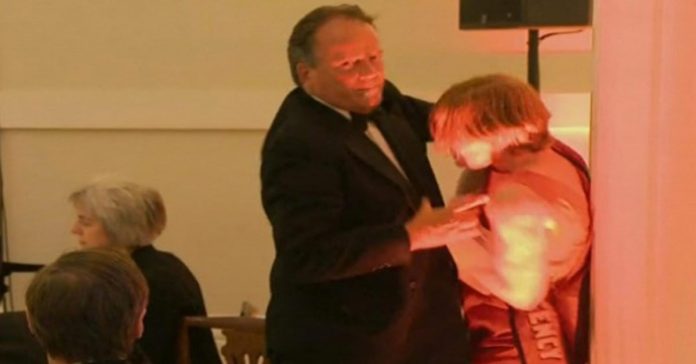 Mark Field has been suspended as a Foreign Office minister after grabbing a female Greenpeace activist at a black-tie City dinner.

Mr Field has said he regrets confronting Janet Barker and marching her away as protesters interrupted a speech by the chancellor.

But he said he had been “genuinely worried” she may have been armed.

Ms Barker told the BBC she would not go to the police, but said the MP

should go to anger management classes.

Footage of the incident has been widely shared on social media, with several Labour politicians calling for Mr Field to be sacked.

A Downing Street spokeswoman said Prime minister Theresa May had “seen the footage” and “found it very concerning”.

She added: “The police have said they are looking into reports over this matter and Mark Field has also referred himself to both the Cabinet Office and the Conservative Party.

“He will be suspended as a minister while investigations take place.”

Activists – dressed in suits, red dresses and sashes with “climate emergency” written on them – entered the room. Greenpeace said they wanted to deliver a speech on the failure of the current system.

Footage shows Mr Field, Conservative MP for the Cities of London and Westminster, getting up and pushing a woman protester against a column, before leading her out of the room.

He later told ITV News that guests had “understandably felt threatened” and he had “instinctively reacted” when the protester rushed past.

“There was no security present and I was, for a split second, genuinely worried she might have been armed,” Mr Field said.

“As a result I grasped the intruder firmly in order to remove her from the room as swiftly as possible.”

He added: “I deeply regret this episode and unreservedly apologise to the lady concerned for grabbing her but in the current climate I felt the need to act decisively to close down the threat to the safety of those present.”

Footage shows Mr Field getting out of his seat and stopping one female protester by pushing her against a column and marching her out of the room.

City of London Police said it was looking into “a number of third-party reports of a possible assault”.

And Conservative chairman Brandon Lewis told ITV’s Good Morning Britain the party would investigate the “full details of what happened”.

Greenpeace campaigner Areeba Hamid told the BBC the activist had been “in shock” on Thursday night, but was recovering and had been reassured by the “outpouring of support” online.

I think Mark Field should have a long hard stare at himself and think whether that behaviour is in keeping with someone in public office, she said.

It was “quite ludicrous” to suggest that the protester might have been armed, Ms Hamid added.

Labour’s shadow women and equalities minister Dawn Butler tweeted: “This is horrific… [Mark Field] must immediately be suspended or sacked.”

This is horrific. Conservative Foreign Office Minister Mark Field violently grabs a woman as she protests about climate change at the bankers’ banquet.

This appears to be assault. He must be immediately suspended or sacked. Due to Violence against women.https://t.co/fjy6HZXyyG https://t.co/mM8hJ47ult