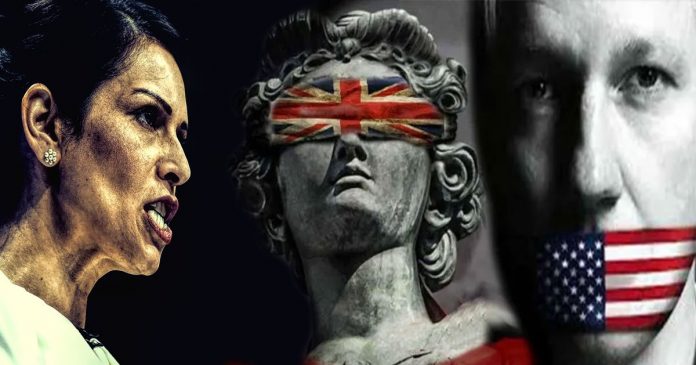 Wikileaks founder Julian Assange’s extradition to the US has been approved by UK Home Secretary Priti Patel.

British politicians will celebrate World Press Freedom Day next week by debating the safety of journalists and the importance of free expression with no sense of irony at the fact Priti Patel has just signed and approved the extradition of WikiLeaks editor Julian Assange to the US. where if convicted, he could be jailed for 175 years.

julian Assange’s crime was nothing more than revealing the truth about war crimes and other crimes against humanity committed by the United States government and its allies. His commitment to telling the truth despite the consequences, makes him one of the most courageous and daring journalists of our time.

We know that if Assange is extradited and convicted, it is not only his rights that are at stake, but the rights of journalists and publishers globally.

Julian Assange and his team of lawyers have only 14 days to appeal over the decision, the Home Office said.

It said the courts found extradition would not be “incompatible with his human rights” and that while in the US “he will be treated appropriately”.

Mr Assange is wanted by the American authorities over documents leaked in 2010 and 2011, which the US says broke the law and endangered lives.

The Wikileaks documents related to the Iraq and Afghanistan wars.

WikiLeaks had published around half-a-million classified US documents about the wars in Iraq and Afghanistan, including documentation of suspected war crimes committed by US troops. An example is a video labelled “Collateral Murder,” which made WikiLeaks famous overnight in spring 2010. The footage showed how civilians in Baghdad, including two Reuters journalists, were shot from two Apache helicopters.

In 2011, Wikileaks allowed unflattering insights into US foreign policy when it published more than a quarter-of-a-million US diplomatic embassy cables, which were also classified.

The Australian is being held at Belmarsh prison in London after mounting a lengthy battle to avoid being extradited.

Extradition allows one country to ask another to hand over a suspect to face trial.

Responding to the home secretary’s order, Wikileaks confirmed it would appeal against her decision.

BREAKING: UK Home Secretary approves extradition of WikiLeaks publisher Julian Assange to the US where he would face a 175 year sentence – A dark day for Press freedom and for British democracy
The decision will be appealedhttps://t.co/m1bX8STSr8 pic.twitter.com/5nWlxnWqO7

Mr Assange’s wife, Stella, said her husband had done “nothing wrong” and “he has committed no crime”.

Watch: The CIA plan to murder Julian Assange and the fight to free him | @DoubleDownNews #FreeAssangeNOW pic.twitter.com/8LTjMwQtfx

“He is a journalist and a publisher, and he is being punished for doing his job,” she said.

In a press conference outside the British Embassy in New York, his brother Gabriel Shipton said they would take his appeal to the European Court of Human Rights if not successful in the UK’s High Court.

The Assange case creates a precedent that mortally threatens freedom of the press in Britain. If Assange is extradited then any journalist who publishes information that the American authorities deem to be classified, however well-known or harmless it may be, will risk being extradited to face trial in America. The then US secretary of state, Mike Pompeo, says that non-Americans like Assange do not enjoy ‘First Amendment rights to free expression.

1. Everyone has the right to freedom of expression. This right shall include freedom to hold opinions and to receive and impart information and ideas without interference by public authority and regardless of frontiers.

Britain and the US are going further down the same path towards “illiberal democracy” as Turkey, Hungary, Brazil, India and the Philippines and of course, Belarus.

What Assange and WikiLeaks did – obtaining important information about the deeds and misdeeds of the US government and giving that information to the public – is exactly what all journalists ought to do.

Ken Loach calls out Sir Keir Starmer, what were his dealings in the Julian Assange case