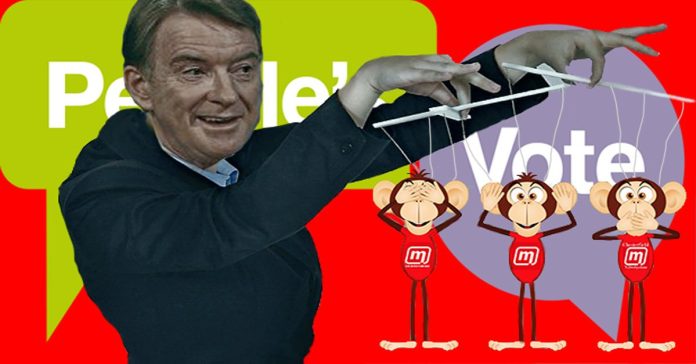 A petition was raised by a Momentum member to call for Jeremy Corbyn to back the ‘People’s Vote’ AKA a second referendum.

This could be the worst betrayal in recent Political history.

Momentum’s entire reason d’être is to support Jeremy Corbyn and the Labour Party.

I have been a Momentum member since early 2016. In 2018 I was a candidate for the NCG, and see Momentum the main reason for joining Momentum to support Jeremy Corbyn, help move the Labour party back to its traditional place of the Left and campaign for both Jeremy Corbyn and a socialist Labour Party.

Our aim is to fight locally on social issues, our NHS, housing, bringing back public ownership, to help bring about a society for the many, not the few!

But nowhere has it ever been stated that Momentum was about forcing policy on Jeremy Corbyn. In actual fact, that is the opposite of why we were set up and supported by so many people in the first place.

After the attempted Chicken coup we defended and campaigned not only for Jeremy Corbyn as Leader of the Party but for our very democratic vote not to be overturned by a small part of the Labour Party the right wing of our PLP.

This became a fight for democracy and our right to see our democratic vote for Jeremy Corbyn as leader of the Party fulfilled.

We rallied to the call of democracy that our vote must not be overturned by the few. It seems that democracy to some is only democracy when it suits them. The hypocrisy is blatant.

This petition and subsequent poll that will be carried out by Momentum, in my opinion, removes our very support from Jeremy Corbyn along with undermining the core values of democracy. The one politician we claim to trust and in whose name our group was formed along with being the primary reason of existence is supporting Jeremy Corbyn. Some now want to force Corbyn into a position that does nothing but undermines him. forcing both. Jeremy and the Labour Party into an untenable place.

Even with all the best will in the country, the entire membership and PLP behind him Jeremy can’t call a People’s vote or second referendum!

Only the government can ever call a referendum, and that just won’t happen. The Tories effectively would be committing political suicide. In much the same way the Labour Party would with such a move. After initially saying we respect the result of the Referendum only to turns on our heels and say we no longer respect that result and now want a second referendum would mean an absolute electoral disaster in the 70% of Labour seats that voted ‘leave’ outside London and the South East. This would destroy our chance at Government. For Momentum members, this could possibly be the straw that breaks the camel’s back and would see Jeremy Corbyn removed as leader of the Labour Party.

The petition organisers have insisted this is not to cause harm to Jeremy Corbyn. That is very hard to justify when the Petitioners want Momentum to force Jeremy Corbyn into supporting Peter Mandelson’s People’s Vote which will more than certainly damage Jeremy Corbyn and the entire movement to the Left.

Momentum is not a group of centrist liberals but a movement that has placed its trust in Corbyn for good reason – here is, a person that for the first time in a long time inspires people. Jeremy Corbyn does not need his most ardent supporters to be manipulated into forcing him into a position that is untenable to the Labour Party as a whole but Corbyn specifically.

I get that there is a large proportion of Labour supporters that would like to see the UK remain in the EU for whatever reasons they see fit. However, forcing Jeremy Corbyn into a remain position will not make that happen.

With the best will in the world and the combination of all Parties backing a People’s vote, it is doomed to failure.

If Jeremy Corbyn after seeing the entire Brexit deal feels that we need a second referendum then let Corbyn and the Brexit shadow ministers call a referendum they see fit to call. Do not force his or the Labour Party’s hand prematurely.

Consider carefully who are behind the Peoples Vote and ask why they are pressuring Jeremy into backing this second referendum knowing full well he does not have the power or authority to make it happen.

Who runs the People’s vote?

Just so you get a picture of who is pulling the strings here are some of the directors of Open Britain Ltd the company behind the Peoples Vote.

Others can be found here including a few Billionaires.

Again why is the pressure not on Theresa May after all she is a ‘remain’ Prime Minister?

Peter Mandelson, the architect of New Labour, the man that has said he is working every day to undermine Jeremy Corbyn, the Blairite peers stood up in the House of Lords to lambast their party’s leadership for backing Brexit.

It is the most deceptive move in UK politics this constant remain rhetoric from the Left or should I say from the centralist Blairites dictating the agenda of the Left.

Seriously if the entire Labour Party backed remain then what?

It would also cause Jeremy Corbyn’s position to be untenable; after all, he promised to respect the result of the referendum.

The Labour Party would lose millions of not just its core voters but others that see the refusal to support a referendum as anti-democratic.

The right-wing press will rip Labour to shreds:

Then the Tories will blame Labour for any bad deal due to their lack of support.

And to top it all Theresa May is the only person able to call a referendum and she will laugh while giving Labour a resounding ‘NO!’.

Peter Mandelson, the architect of New Labour, has said he is working every day to undermine Jeremy Corbyn Peter Mandelson The man behind the People’s Vote.