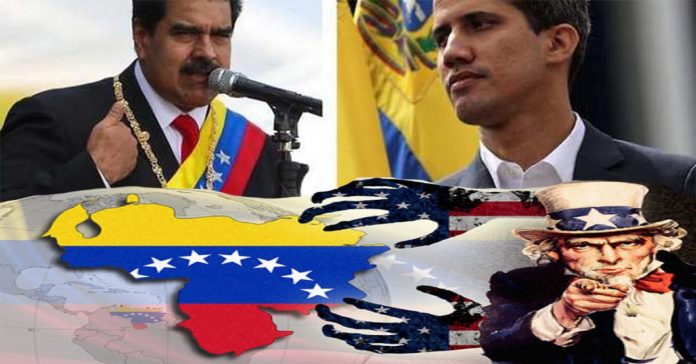 The European Parliament adopted a resolution Thursday recognizing Venezuela’s opposition leader Juan Guaidó as the country’s interim president, and called on EU countries to support him until new “free, transparent and credible” presidential elections could be held.

The resolution — initiated by the European People’s Party — was backed by 439 votes to 104, with 88 abstentions.

In an interview, the Ambassador of Venezuela to the EU, said this will fuel tensions in the country and asks the European member states to act with responsibility.

“The European Parliament can not consider itself above the Security Council. The important thing is to ask whether the European Union is willing to take a step forward to bring Venezuela into a situation of civil war; that is the question that must be asked. Not if Venezuela wants to make changes in its democracy and in its institutional arrangement,” Claudia Salerno, Venezuela’s Ambassador to the EU.

The opposition immediately welcomed the vote in the European Parliament.

But the former mayor of Caracas, who was in the parliament to listen to the debate, said to be carefully about dialogue.

“If a working group is gonna be created, whatever they have in mind to design, I would like to make it very clear that we would only endorse and accept a working group to define the terms of the end of the usurpation, we say no to negotiations to give Maduro oxygen. Any diligence is to put an end to drug tyranny,” Antonio Ledezma, opposition leader and ex-mayor of Caracas told Euronews.

The resolution approved by the parliament calls for the creation of a contact group that can mediate to reach an agreement for the convocation of “free, transparent and credible presidential elections, based on a agreed calendar, on equal conditions for all actors, transparency and the presence of international observers”.

The political and economic crisis in Venezuela is getting worse. Social division has deepened between President Nicolas Maduro, backed by Venezuela’s military, and self-declared President Juan Guaido, who is Speaker of Parliament and leader of the opposition. The world community has been taking sides.

In a social media video President Nicolás Maduro made this statement:

LET US NOT ALLOW ANOTHER VIETNAM WAR IN MY HOMELAND

People from #USA, I ask for your support in order to reject the interference of Donald Trump’s administration which intends to turn my Homeland into a “Vietnam war” in Latin America. Don’t allow it!

People from #USA, I ask for your support in order to reject the interference of Donald Trump’s administration which intends to turn my Homeland into a “Vietnam war” in Latin America. Don’t allow it!

According to official results, Maduro secured a second six-year term after obtaining 5.8 million votes, while his main opponent, Henri Falcon, garnered a total of 1.8 million.

Turnout in the election, which came against the backdrop of a political and financial crisis, stood at 46.01 percent.

The country’s main opposition coalition, the Democratic Unity Roundtable (MUD), boycotted the vote, while the two most popular opposition leaders, Henrique Capriles and Leopoldo Lopez, were barred from running in the vote.

The White House branded the vote a “sham”, and US President Donald Trump issued an executive order limiting Venezuela’s ability to sell state assets, including those from state-run oil company PDVSA, heightening pressure on Maduro’s government.

Maduro hit back at the US move, saying he rejected “all the sanctions that are sought against the Bolivarian Republic of Venezuela, because they harm it, they generate suffering for the people of Venezuela”.

International Observers to Venezuela’s Election Pen Letter to the EU

International observers to Venezuela’s elections have written to Federica Mogherini, High Representative of the EU for Foreign Affairs and Security Policy, about the problems with the EU declaration on the elections.

“Major obstacles to the participation of opposition political parties and their leaders, an unbalanced composition of the National Electoral Council, biased electoral conditions, numerous reported irregularities during the Election Day, including vote buying, stood in the way of fair and equitable elections.”

I was a member of a roughly hundred-strong core of observers of the May 20 Venezuelan election. We met senior representatives of all the candidates, and questioned them closely. We met with the president and two vice-presidents of the Supreme Judicial Tribunal. We examined the electoral system in detail and, on election day, observed voting procedures across the country.

We noted, in particular, not only the sophistication of the voting system which, in our collective view, is fraud-proof, but also that every stage, from the vote itself to the collation of returns, their verification and electronic submission, was conducted in the presence of representatives of the contending parties. As for “reporting irregularities”, we would be interested to hear of examples, since the reporting system is exceptionally rigorous and tamper-free. We doubt you have any evidence to back up the EU’s claim of “numerous reporting irregularities”.

We were unanimous in concluding that the elections were conducted fairly, that the election conditions were not biased, that genuine irregularities were exceptionally few and of a very minor nature. There was no vote buying because there is no way that a vote CAN be bought. The procedure itself precludes any possibility of anyone knowing how a voter cast her or his vote; and it is impossible – as we verified – for an individual to vote more than once or for anyone to vote on behalf of someone else.

In short, the claims in your press release are fabrications of the most disgraceful kind, based on hearsay and not on evidence and unworthy of the EU. It has not escaped notice that the EU was invited to send observers to the election and declined to do so. NONE of the criticism in your EU press release is, therefore, based on direct EU observation in the field.

I would be happy to discuss this further with you and to put you or your colleagues in touch with other observers – among whom were senior politicians, academics, election officials, journalists and civil servants from many different nations including: Spain, UK, Northern Ireland, Germany, Brazil, Argentina, Uruguay, Paraguay, Chile, Honduras, Italy, several Caribbean countries, South Africa, Tunisia, China, Russia,and the United States (sic).