Dennis Skinner on the EU.

The Beast of Bolsover stands head and shoulders above most Labour MP’s of today, he is a man of principle and dedication to the Labour values that the party was built on.

In an interview with the Morning  Star Dennis skinner had this to say:

“My opposition from the very beginning has been on the lines that fighting capitalism state-by-state is hard enough. It’s even harder when you’re fighting it on the basis of eight states, 10 states and now 28. 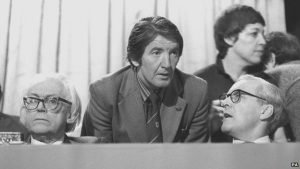 “In the old days they could argue you might get a socialist government in Germany, but there’s not been one for donkeys’ years.

“At one time there was Italy, the Benelux countries, France and Germany, Portugal, Spain and us.

Now there’s just one in France and it’s hanging on by the skin of its teeth.”(Since this interview France no longer has a Socialist Government, Dennis was right again!

Mr Skinner said the prospect of the NHS being subject to the rules of the pro-privatisation TTIP trade deal between the EU and US was also a “significant” factor in his decision to vote Leave.

Labour warned this week that workers’ rights, such as four weeks paid holiday, maternity and paternity leave, equal pay and health and safety laws, could be at risk if Britain leaves the EU.

But Mr Skinner pointed out many of those rights are enshrined in British law and believes the Tories “couldn’t shift them.”

He said: “What [the EU] should be doing, if it wanted to convince people like me, is have a directive to get rid of zero-hours contracts across the whole of the EU. That’s what I’d be looking for.”

Mr Skinner insisted that his wish to leave the EU was not “based upon waving a flag or immigration.

Instead, he said, the country needs to learn from the miners if it wants to achieve community cohesion.

“When I left school and went to work in the pits I was working with displaced persons from Poland, Ukraine, Lithuania and so on,” he told the Star.

The reason why that didn’t create a great many problems for the miners was that we insisted that they could not undermine our wages, they would be paid the same as us whatever job they did.

“And what’s more they had to join the appropriate union. That’s why there was harmony in the pits and that’s what should happen today.”

Although Mr Skinner will be voting differently to Jeremy Corbyn, he backed the party leader’s refusal to share a platform with political opponents during the campaign.

“I won’t join these Tory and Ukip campaigns, I don’t believe in helping to bolster their prestige,” he said.

“I told Tony Benn when he was surrounded by Union Jacks in Trafalgar Square that he shouldn’t be on that bloody platform.

“So I don’t play any part with them.”

Despite that, his intervention was welcomed by Labour MP Gisela Stuart, who leads the cross-party Leave campaign.

She said: “Dennis is one of the most respected figures in the Labour Party and his decision to vote to Leave will send a signal to many thousands of hard-working Labour supporters that traditional Labour values and workers’ rights are best protected if we leave the EU and take back control.”

Labour veteran Dennis Skinner MP voted in favour of the EU Withdrawal Bill in response to this newspapers branded “The Beast a Scab!” This was not only an insult to Dennis Skinner but one to all the 70% of Labour constituencies that voted to leave the EU.

Labour veteran Dennis Skinner MP spoke to Westmonster about why he voted in favour of the EU Withdrawal Bill, This interview revealed the real truth about the vote!

A recent film about Dennis Skinner shows how this veteran MP has worked relentlessly to support workers rights and the working class throughout the UK and not just in his own constituency where he is regarded has the man of the people: Nature of the Beast