A union chief and close ally of Jeremy Corbyn has come out fighting against a second referendum on Brexit.

In a blunt opinion piece on Mirror.co.uk, the posties’ union chief hit out at its supporters from Tory MP Anna Soubry to Labour’s Chuka Umunna.

And he accused them of fighting for a “status quo, the establishment knows best” mentality.

Mr Ward is understood to have not spoken to Mr Corbyn about his piece today, and his opinion is a personal one. But his intervention comes as Labour is gripped by an urgent internal debate over whether to swing behind a second EU referendum.

Currently the policy is one “option on the table”, as agreed by Labour’s party conference in September.

Shadow Brexit Secretary Sir Keir Starmer said on the weekend Labour is at the third phase of its policy and suggested it must make a decision.

But Mr Ward, whose Communication Workers Union has just under 200,000 members, writes: “I cannot support a second referendum”.

He adds: “Those who live and breathe a second referendum are saying to millions of people: let’s fight for the status quo, the establishment knows best and we should continue on our current cours.“

“I can think of nothing that would do more damage to our democracy and give more space to the far right.”

Mr Ward said in September that although he felt a second referendum would simply re-run old arguments, he still supported all options being on the table.

Today however he writes: “When I see Anna Soubry on a stage outside Parliament being cheered like a heroine, after voting for policies that have put people on the streets, I know it’s not the right path.

“When I see Chuka Umunna, who has made more wrong calls than a non-league referee, saying another referendum is a good idea I know for sure that it’s not.” 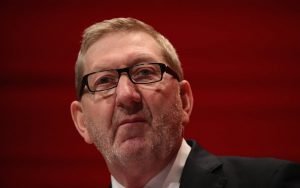 Last month Mr McCluskey warned a second referendum “risks tearing our society further apart, as the ignored majority believe their views have been scorned once again”.

He added: “It is democratically implausible to try to set aside a decision taken by a clear majority just two years ago.”

“I will not vote in favour of a ‘People’s Vote’ if it comes before Parliament.”

Labour’s composite motion was always an ‘OPTION’ for a Second referendum, not a ‘POLICY.’