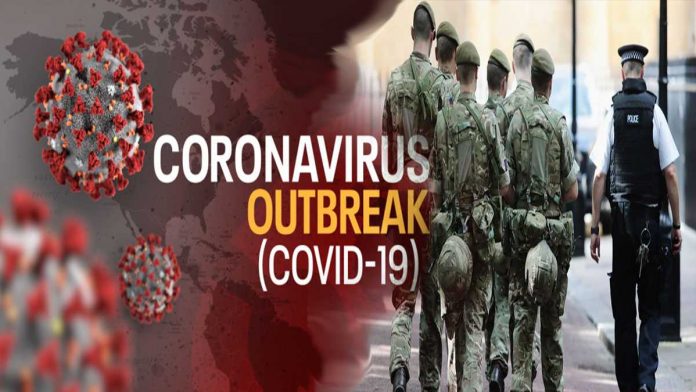 All of France should stay at home from 12 noon on Tuesday, President Macron announces, in bid to control spread of virus as cases spiral.

Are we heading for curfews? There are active discussions within the Trump administration to encourage a possible “curfew” across the nation in which non-essential businesses would be encouraged to close by a certain time each night in response to the coronavirus pandemic, according to an administration official and another source familiar with the matter.

France to lockdown as UK told ‘avoid contact’ “We are at war”, says Macron

‘Stay at home’ from 12noon tomorrow, Tuesday, March 17, for at least two weeks, says president. Only go out for work, shopping, medical reasons and exercise (alone).

“We are at war. A health war, certainly, but a war,” the President said on Monday evening, as he announced new and stricter measures to fight the spread of the coronavirus epidemic in France.

Starting Tuesday, at noon, France would go on a 15 day lockdown, the President said.

All movement was to be reduced to the strictly necessary.

“You will be able to go to get medical help, to go to work if you have to, and to do a physical activity, but you will not be able to meet up with friends in the street,” the President said.

“But you will not be able to shake hands, and you will have to keep one metre between yourselves.’

Any violation of this new regime would be “punished,” he said.

“Everyone needs to get together on one single objective: slow down the spread of the epidemic,” the President said.

“Listen to the health personnel who are saying ‘if you want to help us, stay at home’,” he said.

France’s national health agency Santé Publique France reported that the coronavirus death toll had risen to 148 on Monday, with over 6,600 confirmed cases of the virus.

“Until now, COVID-19 was perhaps something distant,’ the President.

“Now it has turned into something immediate, something real,” the President said, referring government’s ramping up of restrictive measures this weekend, ordering all bars, restaurants and other ‘non-essential commercial activity’ to shut down.

“We have seen people not respecting the government’s advice, continuing to go to parks and bars,” Macron said.

Despite French health authorities urging people to stay home as much as possible, many Parisians were out and about on Sunday to enjoy the sunny weather.

“To all of you who didn’t follow the advice, you are not only not protecting yourself, you are also not protecting others,” Macron said, urging everyone to ‘act responsibly’ to lighten the strain on the already overstretched health system.

“If you aren’t experiencing serious symptoms, don’t go to the hospital, don’t call your doctor,” he said.

Macron repeatedly said France was “at war” with the virus and also announced that the second round of local elections due to be held on March 22 would be postponed.

“France has never had to make such decisions,” Macron said.

“They were taken with one goal: to protect us.”

The EU had agreed to shut its external borders for the next 30 days, the President said.”The more we act together the quicker we will overcome this.”

“I am asking you not to panic. We will win.”

The current number of Covid-19 cases, since January 24, is 5,423 with 127 deaths and the number is doubling every three days.

President Macron made the announcement in a televised address to the nation at 20:00 tonight.

Boris Johnson has said everyone in the UK should avoid “non-essential” travel and contact with others to curb coronavirus – as the country’s death toll hit 55.

Boris Johnson said people should work from home where possible as part of a range of stringent new measures.

Pregnant women, people over the age of 70 and those with certain health conditions should consider the advice “particularly important”, he said.

People in at-risk groups will be asked within days to stay home for 12 weeks.

In the first of a series of daily briefings on the virus, the prime minister – alongside the government’s chief scientific and medical advisers – said the key new measures are:

Chief medical adviser Prof Chris Whitty said the group of people who should take “particular care to minimise their social contact” were:

Mr Johnson said “drastic action” was needed as the UK approaches “the fast growth part of the upward curve” in the number of cases.

Health Secretary Matt Hancock told the House of Commons the number of people to have died with the virus in England had risen to 53 – and “the disease is now accelerating”.

The first death in Wales, and a death in Scotland, brings the total number of deaths in the UK to 55.

“We are in a war against an invisible killer,” Mr Hancock said, adding that emergency legislation to tackle the virus would be introduced to Parliament on Thursday.

Italy curfew, fines and even prison

In Italy, authorities have ordered everyone to stay inside unless they have reason to go out, such as work, a medical appointment or to buy food. People there have to self-declare online giving a reason for being out of the house, which must be handed to authorities on demand. Lying on the document could result in a fine of up to €206 or even a spell in prison. There are also limits on which shops can open.

Trump says Americans should avoid gatherings of 10 or more

Trump said he was not currently considering implementing a national curfew to mitigate the spread of coronavirus.

Trump said he is not currently considering a nationwide lockdown in response to the coronavirus crisis.

“At this point, not nationwide,” Trump said. “We may look at certain areas, certain hotspots.”

A number of European countries and US states have announced lockdowns in recent days.

“We look forward to the day that we can get back to normal,” Trump said.

COVID-19 has spread to every state in Germany, and public life is set to grind to a halt. Schools, restaurants and non-essential businesses have closed while holiday travel is prohibited and borders are partially closed.

German Chancellor Angela Merkel announced new measures on Monday to try to prevent the further spread of COVID-19 in Germany.

Non-essential businesses and shops will shut down, while religious gatherings will be prohibited and holiday travel will grind to a halt.

“There have never been measures like this in our country before,” Merkel announced. “They are far-reaching, but at the moment they are necessary.”

Supermarkets, pharmacies, petrol stations, banks, post offices, delivery services, drycleaners and hairdressers will be among the businesses that will remain open.